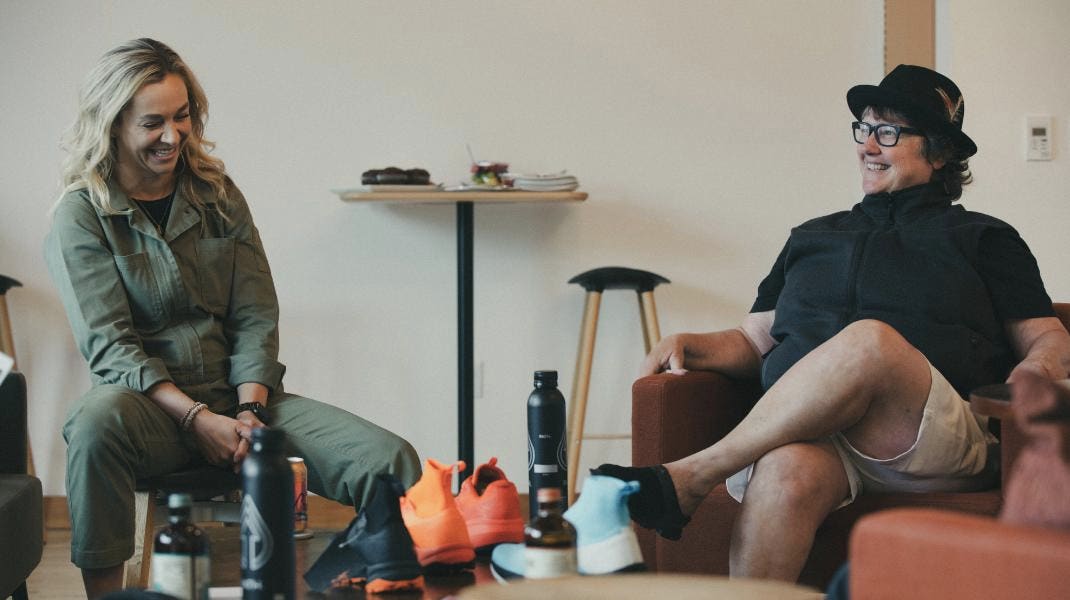 Arc’teryx is proud to live and create for the mountain environment. Based in the Coastal Mountains of North Vancouver, British Columbia since 1989, Arc’teryx now has an additional home, footwear. And in Portland, arguably the performance footwear capital of the world and just 300 miles from Arc’teryx headquarters.

While Arc’teryx has had shoes in its catalog for years, opening a category-only office in Portland, the brand aims to create new mountain-ready offerings and create shoe silhouettes that become as iconic as the Alpha jacket.

“What’s drastically different this time around is the amount of resources and investment we put behind the shoes and the focus,” says Ovidio Garcia, vice president of shoes for Arc’teryx. “Our design statement is the same, but there’s more emphasis and more focus.”

Portland Arc’teryx office opened in temporary space in 2021. Now with five footwear industry veterans – the Portland area is home to a who’s who of footwear brands and ancillary resources – and continues to grow, the brand is currently building 8,800 square feet of space with help from Skylab Architecture in Portland’s northwest Slabtown neighborhood, within walking distance of its flagship store and 5,200-acre Forest Park.

Garcia says the resources available in Portland, from biomechanics to design to contractors, allow Arc’teryx to leverage available knowledge while working with experts from the Advanced Concepts Department at North Headquarters. Vancouver, allowing the brand to develop their footwear knowledge and skills.

Creative director Katie Becker sees shoes as a new anchor for the company, especially as it becomes a brand 365 days a year.

The Portland-based shoe designers spent time in Portland and North Vancouver, learning Arc’teryx’s ethos and sharing a fresh perspective on everything from materials to process. “It’s been fun,” says Dylan Petrenka, Global Footwear Design Director, “there’s been micro and macro energy where we’re focusing on what we can do today and thinking long-term what is the vision that will take us to the next five years and the next 10 years.”

With the new direction, Garcia says that initially the Arc’teryx shoe line won’t expand, it will contract “to define what we stand for as a brand.”

Arc’teryx’s goal is to have a different look and feel in the outdoor space, bringing together an “aesthetically very beautiful and functional product”. The shoes will take inspiration from the brand’s design, branching off from previous offerings created with help from sister brand Solomon. “When you walk into our stores or access our online portal, it will be easy to see what we stand for and what we solve,” says Garcia.

From the approach of the climb to a real mountaineering ascent, the brand athlete lives and performs in the mountains, so the designers will be obsessed with high performance needs. “We’re going to be very specific to this base athlete,” says Garcia, “and then we’ll focus on running and hiking. The focus is on that climbing environment.”

Focusing on the mountain can mean many different things. It could be a seven hour mission. It could be 8 p.m. It can be a mix of extreme vertical terrain or a day spent largely on trails, mixed with steep rock faces. “We want to look at the whole mountain environment,” says Garcia. “It’s a long way to get there and in the Coast Mountains it’s rough terrain that’s not as accessible. You’re doing a lot of activity there.”

Abby Bruning, Global Footwear Creative Director, says this 360-degree view of the mountain athlete’s heart defines the product. “Athlete issues have changed and the industry hasn’t changed,” she says. “We find that the needs they have are being underserved.”

That means rethinking every detail, says Pam McNelis, Senior Director of Global Footwear Development. Already, the design team is discovering the modifications and corrections that athletes make on their own and is looking to create a new line of shoes that suits these athletes.

“We know there is a better way, especially for this athlete,” Bruning said.

None of Arc’teryx’s plans work without buy-in from athletes and consumers. In addition to the cadre of athletes constantly sharing feedback, the brand has a new product testing program based in the Coast Mountains. Bruning says the constant interaction of athletes — from Instagram DMs with post-race shoe photos to comment posts — and the help they want is both “unique and beautiful.”

Adam Campbell, professional mountain runner, world champion medalist and Arc’teryx athlete since 2007, now lives in Squamish, BC, and will lead the product testing team. His job is to explain his playing field and get his needs across, then letting the designers get to work.

Having the opportunity to collaborate one-on-one with designers is an exciting part of the partnership for athletes, says Eric Carter, professional mountain racer, member of the U.S. national ski mountaineering team and holder of several speed records. in the mountains. “In fact, going to head office and sitting down and being with the designers is the best perk, for sure,” says the current Squamish resident. “It’s cool to see what they come up with.”

Footwear designers work with apparel and equipment teams to solve the same problem, sometimes taking signatures from apparel and bringing them to shoes. This can include removing seams to a minimum to erase points of failure (and create that minimalist look) or combining elements to eliminate bulk. Arc’teryx doesn’t try to make the most simplistic products — “if it was too clean, we’d make slippers,” says Petrenka — but it’s simple because, they say.

The emphasis on durability requires a reduction in points of failure and increases the quality of materials. That’s why Arc’teryx will continue to partner with engineers at Vibram to create traction patterns and designers at Gore on new, more breathable waterproof membranes.

“We operate on the edges,” says Bruning. “There are very traditional shoe, climbing, hiking and running silos, but there’s so much crossover and these athletes don’t just run, they run, then scramble, then do a bit of bouldering. There is this need in the transition of these activities that we can serve.A lot of the new things that we have coming are getting into the boundaries of the athletes, breaking down the barriers of the traditional siled approach.

Arc’teryx aesthetics in footwear will then solve these unique situations. “If it didn’t have a bird on it, you would still know it was an Arc’teryx shoe,” says Bruning.

Becker says the beauty of the approach is that they won’t release a product until they want to. “We have the time and the space to make the right product,” she says. “We have this thing where we look at form and function. Is it authentic, beautiful, responsible? We want to get as technical as possible and then strip things down to make them look good. Until every shoe concept has this we will gain. We will take our shoes and level them with our outer garments.

As new shoe products continue to be released, such as the recent Norvan LD3 shoe for long-distance trail running which has improved cushioning, fit and support, the team will play a bigger role in the future, like the fall 2022 release of the Vertex, designed to run uphill. It features an integrated sock liner to keep debris out, TPU protection and stiffness designed for climbing technical terrain, and durability meant for extreme commuting. The Vertex’s mixed-terrain approach offers a first look at Arc’teryx’s destination with a “quiver” of mountain-friendly shoe options, all designed to be lighter without sacrificing durability.

Carter says the Vertex offers an example of designers creating around the specific needs of athletes and is “well-suited to our home mountains,” with everything from small lugs for climbing over rock to design elements that help athletes move. . He shared a recent “liaison” that included thousands of feet of technical climbing, followed by a 35-mile run to lead into more climbing and running. Each piece of equipment, including shoes, had to be durable, comfortable, reliable, and serve a particular purpose (such as a loop on the shoe that allowed it to attach to the harness when changing to pure climbing shoes ).

Campbell, who now works as a consultant for Arc’teryx, says this focus on multi-discipline adventures doesn’t allow for compromises in durability or performance. “If you fell or lost grip, the consequence would be really, really bad,” he says. “You don’t want to think about grip on big exposed slabs thousands of feet below you. Our arena is very dangerous and our equipment has to accommodate that.”

Whether it’s the Alpha Vest, Harness, or even the basic backpack, Arc’teryx wants to add footwear to the list of products that make Arc’teryx famous. He believes the new focus and presence in Portland provides an opportunity to be iconic. “You don’t design an icon,” says Bruning, “it becomes so based on the customers who make it. I have no doubt we have one coming, I just can’t wait to see what it is .”

The best ways to get your muddy sneakers back