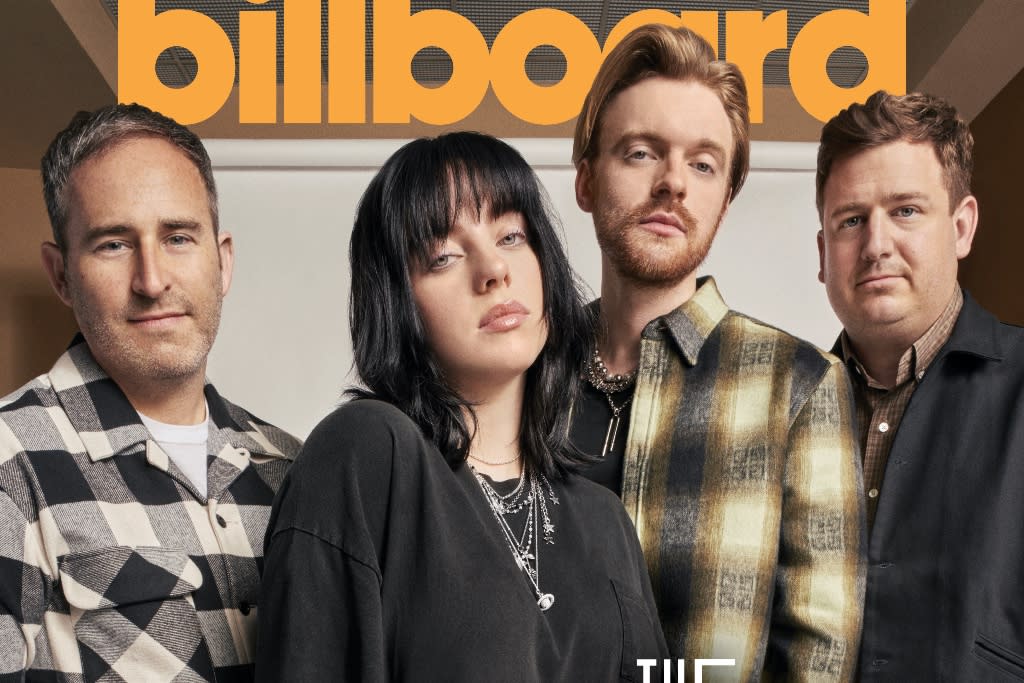 BillboardThe latest cover stars are none other than Billie Eilish and her older brother – and fellow musician – Finneas. The duo are the faces of the music magazine’s second annual Managers issue, celebrating the most powerful talent managers in the music industry. Naturally, they are also joined by their managers Brandon Goodman and Danny Rukasin.

In the issue, Eilish and Finneas wear monochromatic white and black sneakers, respectively. The pair discuss in particular in the accompanying op-ed how they navigated their first year to fame with Goodman and Rukasin, after Eilish’s 2016 song “Ocean Eyes” went viral on SoundCloud.

“They just didn’t know what to say, and I don’t blame them,” Finneas says of other talent managers who met the couple — who, according to Eilish, “treated us like kids.”

“But it proved even more how [Goodman and Rukasin] were with us, especially in the beginning when we didn’t fucking know what was going on,” Eilish shares with writer Lyndsey Havens. “They didn’t worry or scare us or make us feel out of place or like we were doing anything wrong which was really nice.”

The duo also shared their thoughts on success, in particular how the length of other artists’ careers is a bigger inspiration to them than winning accolades – such as the Grammy Awards.

“I had that feeling yesterday at the Grammys because obviously we didn’t win anything – I went into the day suspecting we weren’t going to win anything, and of course the internet, no matter what, is going to be like, “You’ve been robbed,” Eilish says. “I’m just like, ‘I wasn’t, I’ve got seven at home. It’s OK, everything is fine.

As two of the biggest talents in music today, Eilish and Finneas also take a moment to reflect on the longevity of their careers, specifically the challenges artists face in achieving greatness and fame.

“When I was 15, 16, 17, I didn’t think about the things that all the artists before me had gone through to get to where they are,” Eilish shares. “Now I see how hard these people have worked, and I’m noting it, I’m really noting it. I don’t want to hurt anything by saying, ‘I’m going to do this or that’, but I think that it’s an amazing thing when people have longevity.”

Finneas agreed, adding that evolution and reinvention must occur to maintain a presence in the music industry.

“That’s what people forget about musicians so much: whether your favorite musician evolves or not, everyone else on Earth does,” he says. “If you want to be someone’s favorite musician for a decade, you have to evolve, because they are too.”

Goodman also explained how Eilish and her team make long-term plans, especially when it comes to breaks.

“There’s power in going away and coming back,” Goodman says, using Adele as an example. “A lot of artists are. We think Billie has reached the level where it’s OK if she wants to focus on other things for a minute. We’re on her timeline, and when and how she wants to get out of the music, we are here to support it.

For shoes, Eilish usually opts for sneakers. In fact, she recently released a collab with Nike. At previous red carpet events, the star could be seen in platform sandals and pumps from brands like Gucci. However, his go-to styles are often sneakers from Converse, Nike, Burberry and Balenciaga. The star sometimes wears tall boots which also coordinate with her outfits, usually from Moon Boot, Dr. Martens and Swear London.

Check out Eilish’s oversized style over the years.

The best of shoe news