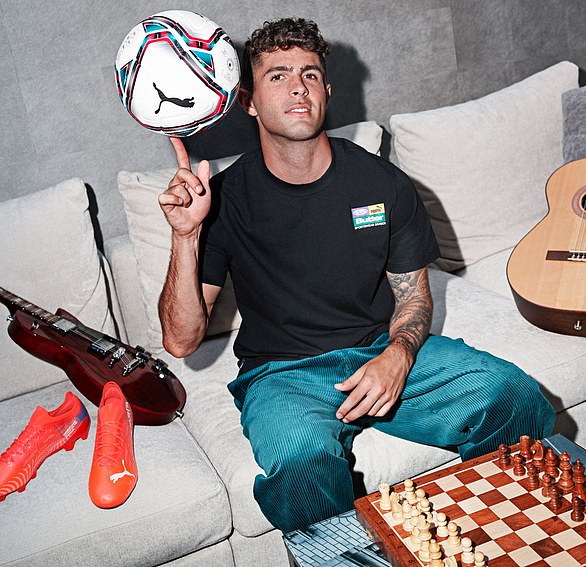 How do you relax?

I listen to music, I like American rap and other stuff like country and western. I play a little guitar, play chess, and talk to my friends and family in Pennsylvania.

Who are your best friends in football?

Nick Taitague and Danny Barbir are guys I’m still in touch with. Danny is a defender who was at Manchester City and West Brom here as a kid and is now at Sporting Kansas City. Nick played for Schalke in Germany but got injured so he’s considering doing something else now. These are guys who have always been there for me.

What was your favorite movie or TV show during the lockdown?

I don’t really watch TV much but I guess it’s a series called Outer Banks. It’s quite interesting, a bit of a childish escape really, but it’s about a bunch of kids discovering a treasure map and a lot of twists and turns.

Who is your toughest opponent?

It is difficult to identify a person. There are a lot of good defenses in all areas, very strong teams that are hard to break.

I had a few more kicks against Porto in CL last season. Games like that, I’m like ‘Dude, really? I can’t escape this pressure! ‘ But it does happen, you just have to get started.

What’s your favorite place to eat in London?

I can’t wait to go out for meals now that places are starting to open up again. It is sometimes difficult to see.

There is a restaurant near the bridge on Fulham Road called Gola. It’s a nice little Italian corner.

I love the pasta and the pizza there, but I also try some of the salads they make.

Who has the best nickname at Chelsea?

There is nothing too crazy or inventive that I can think of. Most of them are basic name abbreviations, you know ‘Pully’, ‘Cally’, N’Golo gets ‘NG’, that’s about as exciting as it gets.

Has Thomas Tuchel changed a lot compared to the coach you knew at Borussia Dortmund?

No. I would say he’s pretty consistent with the coach I knew in Germany. He’s very competitive.

Is there an attraction or place that you like to get away from in London?

I sometimes like to go for a run at Wimbledon and Richmond Park when I need to clear my head. It is a very beautiful part of London.

What is the detail on the back of your new boots?

I have a crazy chess piece on the back of my boots. I love chess and chose it because it’s my favorite piece – it’s always useful during games.

What is your favorite position?

I played at the back for the team and on the wing but I like to play in the attacking third, whether it’s in ten or in the half-space behind the attacker, I like being able to influence the game the low.

What are your goals for this season?

Win more titles with Chelsea. After the Champions League, we are delighted to start.

We have a great team, there are more guys coming in so fight for every title which is our goal. I think with the United States we have to qualify for the World Cup, but the sky is the limit.

It’s great that we have so many good young players playing in the best leagues across Europe. I am so proud to be a part of it.

To celebrate this new partnership, PUMA has teamed up with shoe customizer Silni to produce a special pair of ULTRA 1.3, which Christian will debut in the Super Cup Final at Windsor Park, Belfast on August 11.

On, the sports brand, tells the story of the “world’s fastest blind sprinter”