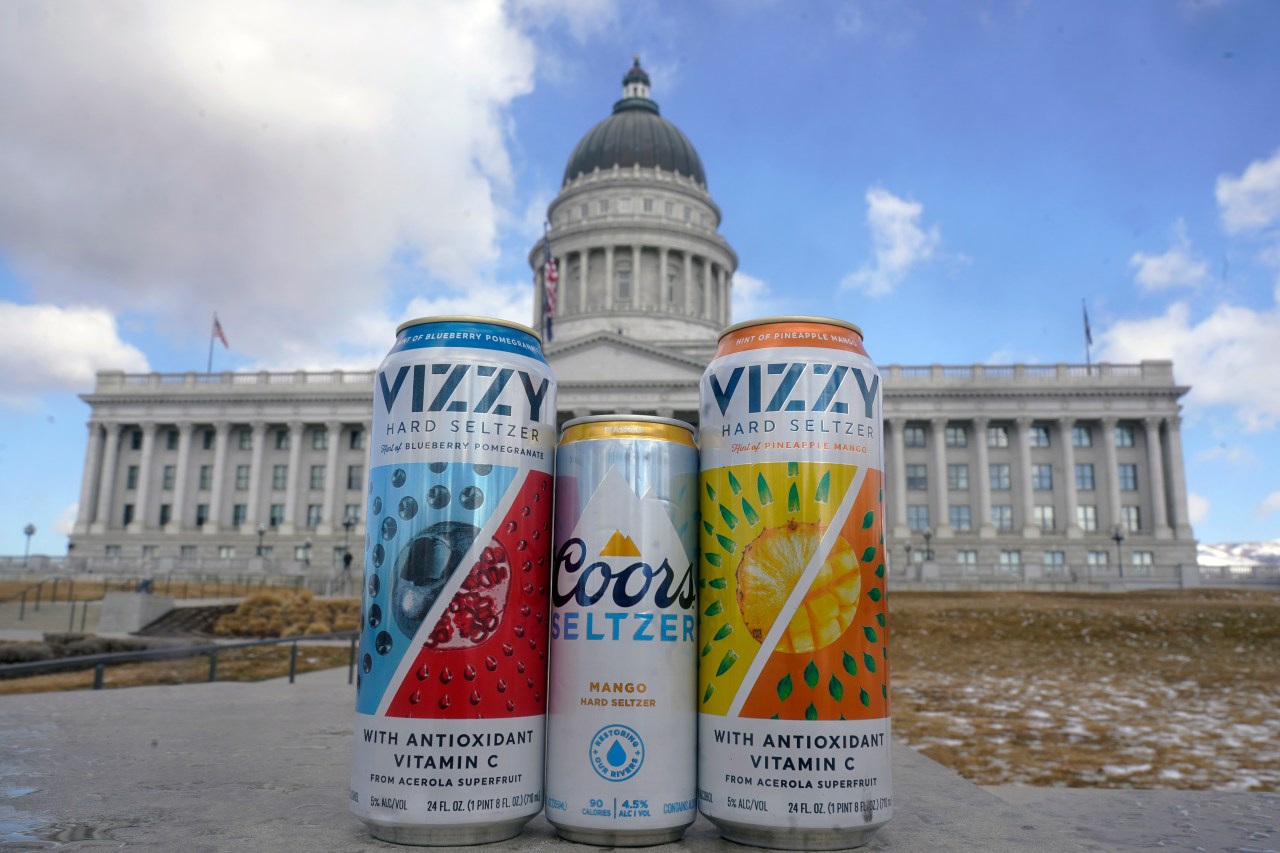 Dozens of hard seltzers could get the boot under Utah law

SALT LAKE CITY (AP) — The latest update to Utah’s notorious restrictive liquor laws could remove nearly half of the increasingly popular hard seltzer from grocery store shelves in the state where most legislators are members of The Church of Jesus Christ of Latter-day Saints.

The problem is flavors that contain traces of ethyl alcohol, making them technically banned from sale in places like grocery stores and convenience stores.

A proposal put forward in the state Legislature on Wednesday would remove from grocery store shelves up to 39 of 80 approved types of hard seltzer, including some made by well-known brands like Truly, Coors and Bud Light. Hard kombuchas, a more recent entry to the market, are also expected to disappear.

They could still be sold at state-owned liquor stores, which are the only legal outlets for high-alcohol beverages like wine and spirits in Utah. But limited storage space means some could disappear from the state altogether.

“The customer will likely be very confused,” said Kate Bradshaw, president of the Utah Beer Wholesalers Association. Some brands will be allowed to sell certain flavors in grocery stores but not others, adding to the uncertainty. The flavorings in question are commonly used in other foods like teriyaki sauce or mustard, she said.

Hard seltzer, essentially flavored mineral water infused with alcohol, has recently seen massive growth in the United States as customers seek alcoholic beverages that are lower in calories and sugar. Many also have somewhat lower alcohol, which initially corresponded to Utah laws that limit alcohol content to 5% for beverages sold outside of its state-owned liquor stores. None of the flavorings would place the goods in question above that limit.

But when the new leadership of the Department of Liquor Control took over with then-newly elected Governor Spencer Cox, they discovered that many hard seltzers did not meet Utah’s strict legal definition of beer, said Bradshaw. The subsequent review also uncovered the issue of flavors. While some issues have been resolved to keep many hard seltzers on grocery store shelves, others are expected to be subject to current legislation.

“It’s a case in the Utah way,” Bradshaw said. “Our definitions are not what 49 other states recognize, or what is federally recognized.”

The legislator sponsoring the legislation, Republican Senator Jerry Stevenson, introduced it as a compromise bill that addresses many aspects of liquor law, including changing the name of the state agency to the Department of liquor services with a friendlier sound.

While many US states have bizarre alcohol regulations, Utah tends to have particularly strict laws, such as the lowest blood alcohol limit in the country. Most lawmakers are members of the state’s predominant religious faith, The Church of Jesus Christ of Latter-day Saints, which is widely known as Mormon and teaches abstinence from alcohol. Faith declined to comment on the latest legislation.

Nearly two-thirds of the state’s approximately 3.2 million residents are also members. But global demographics are changing amid rapid population growth, and alcohol sales are setting records almost every year.

Hard seltzers, meanwhile, are growing in popularity across the country, with thousands of new brands and flavors from traditional breweries and startups alike. They gained momentum with the launch of Truly and White Claw in 2016 and over the past seven years have seen a compound annual growth rate of more than 300%, said COO Brandy Rand. for the Americas at IWSR Drinks Market Analysis. Hard kombucha, on the other hand, dates back to around 2015 and is also appealing to health and wellness conscious drinkers.

“Hard seltzer was fundamentally addressing an unmet consumer need,” Rand wrote in an email. They are “now bigger in pure volume than the entire spirits category in the United States and on the verge of overtaking the wine total.”

Are installment loans and payday loans the same thing? –