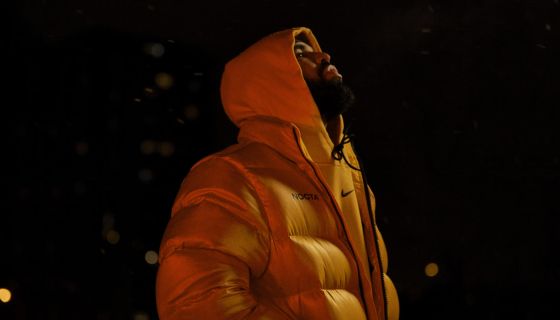 NOTOCTADrake’s sub-label created in partnership with Nike, has released a wide range of apparel since the brand’s inception in December 2020. However, so far it’s all been just hoodies, Gore-tex jackets and golf apparel. But Drizzy finally got down to business and enlisted Jamaican musicians Popcaan and Skillibeng to announce the official release of the Nike Hot Step Air Terra/NOCTA.

Drake uploaded a 27-second clip to his social media with the simple caption: “HOT STEP 😮‍💨☀️👣. Popcaan could be seen rocking the “Triple White” version of the sneakers, while Skillibeng sported the “Triple Black” colorway. And the official Nike Instagram account took a swipe at Drizzy with the comment, “Better late than never.”

The shoes were first teased last October by the hidden.ny Instagram account, and they were set to drop around that time. There has been a minor online feud between Chubbs, dubbed Drake’s “muscle,” and Kanye West’s former manager Don C. Things have calmed down between the respective camps, however.

“I remember seeing all of these athletes representing Nike – each doing the unthinkable – and how inspiring it was. I always felt like there was an opportunity for Nike to embrace an artist of the same way they had athletes,” Drake said in a press release two years ago. “I thought how crazy it would have been and what it would have meant for an artist to have a landmark deal with Nike.”

The shoes have a “grained leather upper,” according to HypeBeast, and the body styling is somewhat reminiscent of the Air Max 95 but with different patterning. Thanks to the incorporated 3M reflective fabric along the sides, heels and throat, there is breathtaking nature. The heel design borrows from the popular Nike Air Max Tailwind IV. Wearers can expect a comfortable experience thanks to the G-Tek traction technology in the outsole.

The Nike Hot Step Air Terra/NOCTA is set to release on Thursday, March 3, and it will retail for $150. To learn more about shoes and other gear from the 6 God’s sub-label, visit NOCTA’s website.

Old Testament – What does it say about loans and interest?