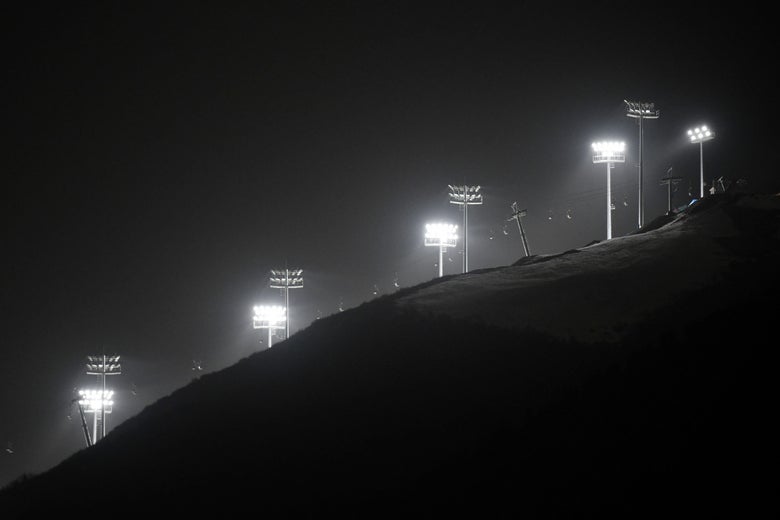 Figure skating, skiing, snowboarding, etc. would they be improved or ruined?

Which Winter Olympic sports would be better if played in the dark? The question has plagued humanity for millennia. As long as athletes strapped skis, skates or curling shoes to their feet, spectators wondered if the resulting competition wouldn’t be more fun to watch if it took place in total darkness. But no one has ever had the courage to try to answer this very important question, until now.

As a public service, I painstakingly analyzed the 15 disciplines of the 2022 Winter Olympics to determine which of them would be improved and which would be ruined if they were to take place with the lights off. I plan to forward the results of my research to the International Olympic Committee, who I hope will take steps to implement these suggestions by Milano Cortina 2026. For now, however, I give Slate readers an overview of my findings.

A quick note before we begin: It is true that many Olympic events take place outdoors at night. However, competing at night is not the same as competing in the dark. Nighttime events use lights to illuminate courses in an attempt to simulate day at night. This act of pride goes against nature. I want to know which Olympic sports would be better with the lights totally off, except for “fun” lighting items like floodlights, Christmas lights, and lasers. Let’s stop being afraid of the dark, Olympians!

There is no way around this: Alpine skiing would be very, very dangerous in the dark. The only way for many skiers not to get hurt or die while descending in the dark would be to go very, very slow, riding in the moonlight and maybe using the little lights foreheads of miners who we let them wear. This passage from quick at very slow would fundamentally change the nature of the discipline, making it more like orienteering than racing. As a result, alpine skiing would go from one of the most popular winter Olympic sports to one of the least popular sports. Verdict: Keep the lights on.

Biathlon, otherwise known as the original “mash-up,” combines target shooting and cross-country skiing in a very weird and unpopular package. Turn off the lights, however, and biathlon could conceivably become a viral sensation. The trick would be to replace the static targets with explosive targets that would shoot fireworks in the pattern of the athlete’s national flag when struck – kind of like one of those gender reveal parties where they detonate tannerite in the woods to announce it’s a boy. What could go wrong? Verdict: Turn off the lights.

Bobsled would clearly look better in the dark. Decorate the course with futuristic tronstyle lighting strips, paint the sleds glow-in-the-dark colors, place a headlight in the nose of the sled, blast some Daft Punk through the arena speakers, and you’re ready to go. to leave. What sleds could lose in speed, they would gain in cyberpunk aesthetics. Verdict: Turn off the lights.

It’s hard enough to get people to watch cross-country skiing, which is a shame, because it’s actually a lot of fun and good. Although turning off the lights and giving athletes small miners headlamps wouldn’t really transform the sport – Nordic skiers can huff and puff down gentle slopes in both darkness and daylight – see nothing other than a bunch of gasping blips on their TV screens would probably make the average Olympics viewer switch channels even faster than they already do. Verdict: Keep the lights onso more people can experience how fun and cool this sport is.

If turning off the lights and flashing a bunch of neon squiggles everywhere can turn bowling into cosmic bowling, then surely it can do the same for curling, a sport that would rule unequivocally in the dark. In cosmic curling, the house would be rendered in fluorescent colors, and the curlers would throw rocks that glowed in the dark and beeped as they rolled down the sheet, like an adorable robot to a lesser extent. star wars movie. These minor changes would bring new audiences to the sport and help athletes make more money in the off-season by opening “cosmic curling” centers and siphoning off some of the kids’ birthday party money from Big Bowling. Verdict: Turn off the lights.

Figure skating could be done in the dark, but it would kind of ruin the whole judging system of the sport. Instead of empirically watching and evaluating a skater’s routines, judges should rely on skaters to call out the names of the jumps and spins they performed, as well as when they botched their landings. For one thing, it would get us to the sixfold axel, much faster than anyone ever imagined. On the other hand, we could not see the costumes of the skaters either. Verdict: Keep the lights on.

I guess you could do freestyle skiing in the dark if the various elements of the slope were illuminated, and also if the inevitable medical evacuation helicopters were equipped with searchlights allowing them to more easily locate injured competitors and take them to the nearest hospital. Verdict: Keep the lights on.

Ice Hockey could and should be done in the dark, as long as events were moved outdoors in homage to the countless low-light games that have been played on neighborhood rinks all over the world. We would allow players to use car headlights to light up the ice, but we would also penalize players if their mothers started honking because it was getting late and they already had to go home and cook dinner. Verdict: Turn off the lights.

Sled would be extremely dangerous in the dark. So let’s make a little compromise and string Christmas lights on either side of the track, and extend the premise by having a course official dressed as a Christmas elf start each athlete’s race by sending them back onto the track, like this scene in A Christmas story. Would these changes make sledding better or more enjoyable? No, but it would be a nice little show of solidarity with those of us who haven’t cut down our Christmas trees yet even though it’s February. Verdict: Go for it.

I admit I haven’t watched much. Nordic combined in my life, but if turning off the lights made biathlon better, maybe it would make this other Olympic thing better too? Or, you know, maybe we could just skip the sport altogether and replace it with some kind of fun laser light show and/or a musical performance by a local Pink Floyd cover band? Verdict: Turn off the lights.

Without major changes, short track speed skating done in the dark would be a real bloodbath. In order to avoid unnecessary loss of life, athletes should either significantly dull their skate blades (boring!), dress in bulky protective gear like hockey players (redundant!), or wear glowing helmets which would make them look like little beacons zooming across the ice. It’s hard to see how anyone could think any of these changes would improve short-tracking, unless you’re a lighthouse guy, and I think we can all agree that we’ve heard enough of youBeacon Guy. Verdict: Keep the lights on.

Skeleton could presumably be more fun in the dark if and only if the athletes were to wear glow-in-the-dark “skeleton” costumes, the kind you buy at Halloween Adventure at 4 p.m. on October 31, because by then they’re sold out of all the good suits. But if they wore those costumes at the Olympics and also created the spooky atmosphere by renting a smoke machine and playing “Monster Mash” over and over again, then it would look like a choice rather than an installation – one on -the- choice of nose, but a choice all the same. Verdict: Go for it.

Even though I hate to say it, I feel like ski jumping just isn’t interesting to watch as it currently is – or, at least, not as interesting as it should be, given that it’s about athletes who literally fly through the air like bats out of hell. So why not lean into the inherent theatricality of the discipline and attach small flares to the athlete’s skis? Make the ski jump area go black except for a single spotlight that follows the skiers as they race down the ramp. Then, once they’re in the air, turn off the spotlight so all you see are the flares streaking across the sky. Make those changes and ski jumping would quickly become the first Olympic sport to win an Oscar for production design. Verdict: Turn off the lights.

Snowboard could be done in the dark under two conditions: first, athletes should be allowed to hold their phones during competition. Second, you should allow athletes to be high enough that they don’t really care. What time of day it was. You know, I feel like a lot of snowboarders are already used to performing in those two conditions. Verdict: Go for it.

Speed ​​skating it’s already good, but it could even be Following great if, instead of having ceiling lights illuminating the track, the track itself was lit from below. It would be a bit like the athletes skating on a giant ring of light. Yes, it would create a lot of glare; yes, the skaters were squinting and crashing a lot; yes, the light would get so hot it would melt the ice and ruin everything; yes, that wouldn’t even count as skating in the dark. In fact, too bad, it’s a very bad idea. Verdict: Keep the lights on.