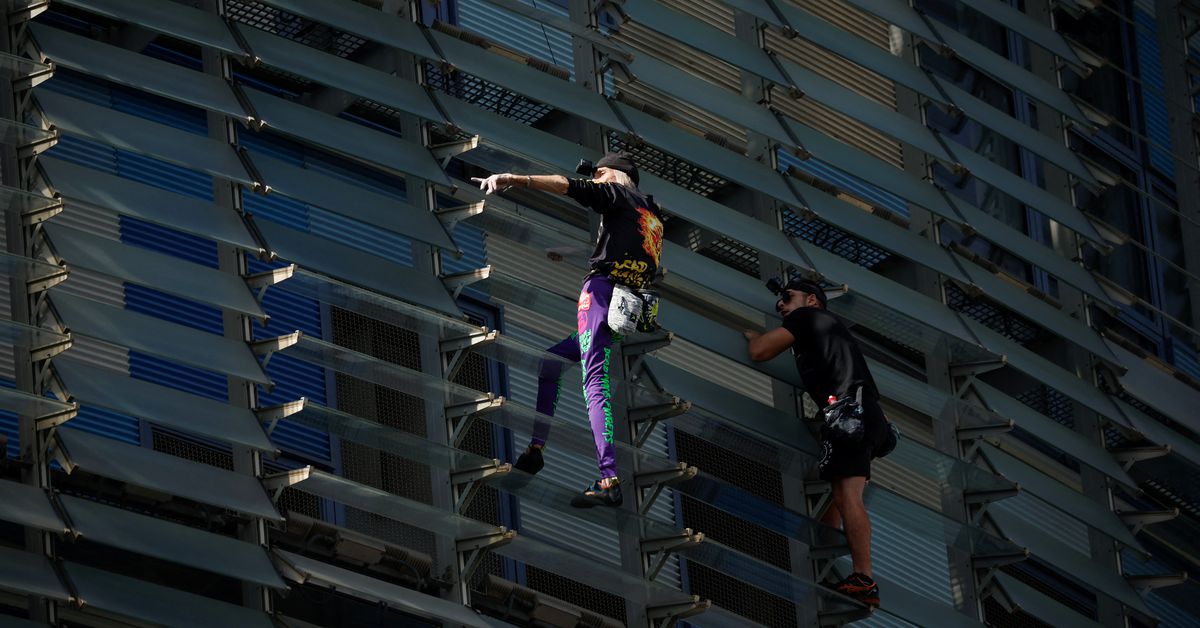 ‘French Spiderman’ climbs the first skyscraper with his son in Barcelona

BARCELONA, Oct 1 (Reuters) – Alain Robert, the free climber nicknamed the “French Spiderman”, scaled one of Barcelona’s tallest skyscrapers without a harness on Saturday. And for the first time, the famous daredevil was joined by his son.

“This time it’s different. My son is not a climber, so I feel responsible somehow,” Robert told Reuters while preparing for the climb. “I know he’s a big boy, 34. It’s his own decision, but at the end of the day, I’m his father.”

Passers-by and Spanish police watched the 60-year-old and his son, Julien, scale the 144-metre Torre Glories, formerly the Torre Agbar, a glass-covered office building designed by architect Jean Nouvel and famous for its nocturnal illuminations. .

“I feel very stressed. I’ve never been so scared in my life,” Julien told Reuters just before starting.

“I’ve done scary things in life, but it’s…I’ve never been so scared for my life. Luckily, I have my dad who will talk to me, guide me.”

The couple completed the climb in less than an hour and were met at the top by police, who escorted them in the most traditional way – inside the building – and did not stop them.

Julien, who spent eight years in the army and is an avid sportsman, prepared for his first ascent by watching videos of his father’s previous ascents.

Alain Robert started climbing in 1975, training on the cliffs near his home town of Valence in southern France.

He took up solo climbing in 1977, since then he has scaled over 150 buildings, including Dubai’s Burj Khalifa – the tallest building in the world – the Eiffel Tower and San Francisco’s Golden Gate Bridge.

Robert rarely gets permission and climbs without a harness, using only his bare hands, a pair of climbing shoes and a bag of powdered chalk.

A rescued baby koala has become a ‘boss’