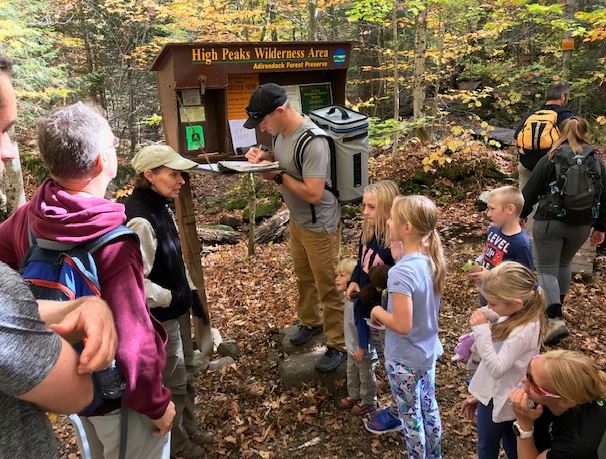 Stephanie Ley sounded like she heard a sour note.

The 32-year-old watched one hiker after another weave through the trees at the base of Gorham Mountain in Acadia National Park in Maine, skirting the rocky trailhead. They were following a path called the social trail, an unauthorized offshoot eroded by foot traffic. Ley, steward coordinator for Friends of Acadie, said it likely started with a quick detour to someone’s bathroom.

“It’s really amazing to me that it came up,” Ley said. “It’s so obvious and so bad, and through this beautiful mossy area, and it only took a few weeks!”

She approached a couple emerging from the social trail and asked them to stick to rocky areas to protect the moss.

“We were just following the well-worn trail,” they said.

The interaction was one of many Ley had with hikers as she climbed less than a mile to the summit of Gorham on a sunny September day. Although she’s technically a summit steward, Ley and her colleagues also enjoin people to use the trails “before they have a chance to go off the beaten path at the top of the mountains, where actually rare and fragile plants”.

Like stewards of the Adirondacks and other parks across the country, Ley is on the front lines of managing more people and their impacts on the environment. Whether at the trailhead or on the peaks, stewards help popular outdoor destinations manage the influx of visitors by providing hiker education, safety advice, trail maintenance and research. Many preach an outdoor code of ethics created by the organization Leave No Trace. It is intended to protect the environment and ensure the safety of hikers.

Kayla White, stewardship manager for the Adirondack Mountain Club (ADK), said stewards are instrumental in changing the way people act outdoors. They are a solution to crowd management, helping bring alpine vegetation back to once-trampled peaks, she said. They also reduce the number of hiker rescues, said McCrea Burnham, Catskill Park coordinator for the state Department of Environmental Conservation.

The makings of a steward

Before there were stewards, New York had firefighters. Established in 1885, the positions reported to a precursor body to DEC called the Forestry Commission. It was not until 1912 that the title of “forest ranger” appeared. Rangers are responsible for public safety and the protection of state lands “through their expertise in search, rescue, fire, law enforcement and wilderness incident management,” according to the state website.

In the 1970s, New York established an assistant ranger program for part-time seasonal rangers to interact with the public in the backcountry. Last summer, DEC hired 23 assistant rangers. Eleven covered Region 5 of the department, which includes most of the Adirondack Park. Four were assigned to the Catskills.

One of the oldest stewardship programs in the Northeast is found within the Blue Line, the Adirondack High Peaks Summit Steward Program. It was developed in 1989 with ADK, the Adirondack Chapter of the Nature Conservancy, and the DEC. ADK trains stewards for other groups, including those stationed at fire towers in the Adirondacks and the Catskills.

Today, the program includes nearly three weeks of training. Summit stewards learn the rules and regulations governing the High Peaks, botany, and how to interact with the public. They also receive wilderness first aid training through Wilderness Medical Associates.

In 2021, the ADK had six paid stewards and 29 volunteers during the hiking season. Stewards rotate five days a week on Wright, Cascade and sometimes Colden.

A summit steward is based each summer day on Mount Marcy, the highest peak in the state at over 5,000 feet, and Algonquin, the second highest. White said the two High Peaks make up about 50% of the state’s alpine area and therefore need protection.

The area begins above the tree line. This is where the late Edwin Ketchledge noticed in the 1960s and 1970s that the tops of the High Peaks were going bald – too bald. The professor emeritus of the College of Environmental and Forestry Sciences at the State University of New York expressed alarm at the rate at which alpine plants were disappearing.

“The fragile living zone on these mountain peaks is only two feet thick, the distance between the impenetrable bedrock and the deadly winds tearing the ground above,” he wrote in a preview. About ADK’s “Adirondack Alpine Summits: An Ecological Field Guide”. “This is not a place where ignorant visitors can reduce the chances of survival by trampling on rare plants and delicate habitat.”

Unlike stewards at the trailhead, summit stewards have more time to engage with people, White said. Summit stewards will usually wait for a hiker to catch their breath, find a good place to sit, and get some food and water before approaching. Then they will start a conversation about the alpine ecosystem.

The summit stewardship program is also part of a research project under the direction of SUNY ESF Professor Jill Weiss. Weiss has been studying alpine stewardship since 2010.

“Above the 4,000 foot mark, we have this whole other network in the sky telling people not to step on plants,” Weiss said. “How did this happen? I found it fascinating.

She is currently working on a three-year project, sponsored by the Waterman Fund, which is studying trends and characteristics of hikers in the North East, including recreational goals, level of outdoor experience and demographics. She hopes the data gathered from alpine stewardship locations will help lawmakers make decisions based on evidence rather than anecdote.

“People hike for many different reasons,” Weiss added. “It’s not just us, them, classics, new, loud, quiet. It’s like, here are 30 new reasons why people are hiking, and we only understand 12 of them. … All we know is that something is changing and we need to understand this that causes this change so that the education and management efforts correspond to the people, their intentions and their interests.

In June, at the start of the Falling Waters Trail leading to the Franconia Ridge Loop in New Hampshire, Stanley Bujalski installed an informative canopy. He hung up his favorite homemade sign, a plastic pink flip-flop with a circle and a line through it.

Bujalski volunteers with the Forest Service at White Mountain National Forest. The 70-year-old retired civil engineer started volunteering as a trailhead steward in 2018. Volunteers set up at the trailhead around 8 a.m., but Bujalski usually tries to make it at the Falling Waters trailhead much earlier. The parking lot tends to fill up around 6:30 a.m., he said.

In Acadia National Park, Ley demonstrated one of the jobs of stewards.

One September day facing the Atlantic Ocean, Ley spotted a pile of rocks on the ridge. It was not a cairn, rocks intentionally piled up to guide hikers along the trail. Ley often finds people adding to the cairns she and her colleagues have built, mistaking trail markers for works of art.

“They think it’s something they can add or create on their own,” she said. “It’s not that they’re trying to be malicious; it’s just that they’ve never been in this kind of climate before, and it’s all new to them.

She sighed and walked towards the pile of rocks, avoiding the weeds and flowers at the top. She took the stack apart.

The full version of this story first appeared on adirondackexplorer.org, a non-profit news organization covering news and politics inside the Blue Line.