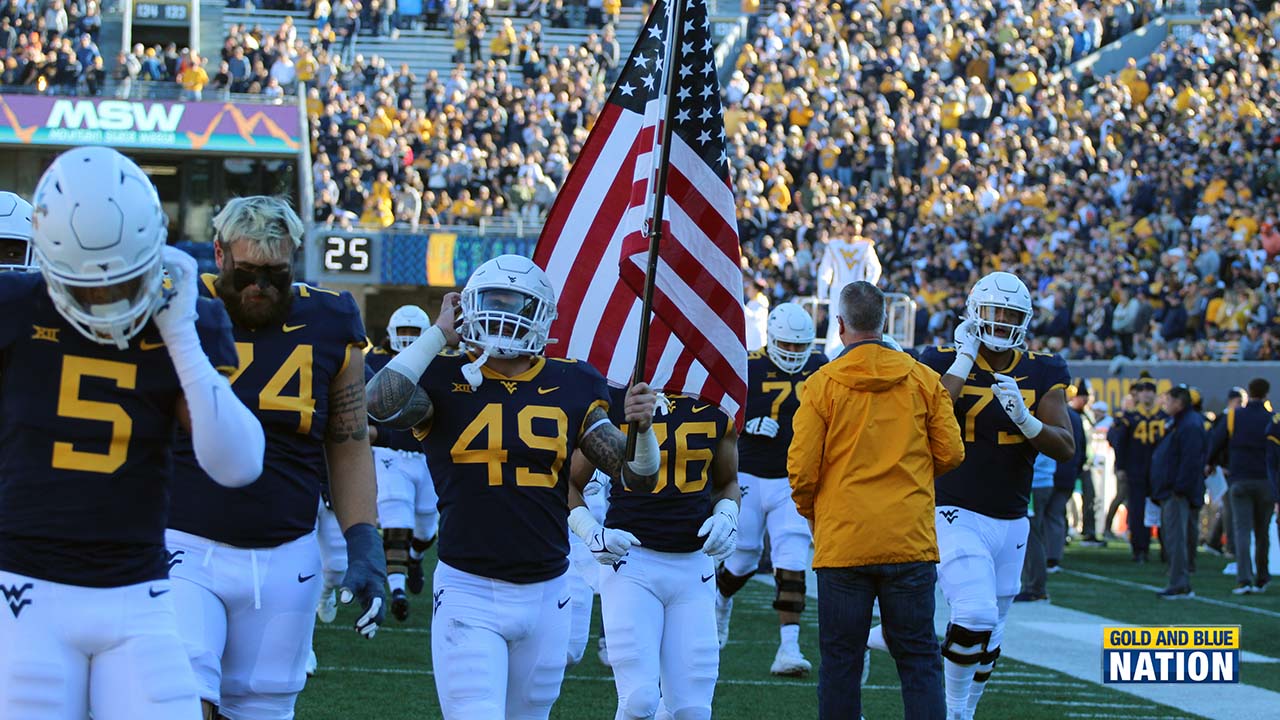 MORGANTOWN, W. Va. – Most people Wil Schoonover’s age are well out of college. Some are well established in their careers, and others are progressing into a graduate discipline.

Schoonover, however, is spending his 25th year mostly at Milan’s Puskar Stadium, fulfilling a lifelong dream of wearing WVU colors. The linebacker is in his second year as a Mountaineer football player, but he’s had a very different road so far than his senior colleagues on the team.

A member of Moorefield High School’s class of 2016, Schoonover had several options to choose from after walking across the stage at graduation. He stood out on the football field, the wrestling mat and the baseball field, and won scholarship offers in all three sports.

Schoonover eventually chose to play football at Glenville State, but academic issues kept him from playing that fall. He then set foot on a whole new path by enlisting in the United States Army.

“For me, I wanted to serve my country,” Schoonover said. “I was very patriotic growing up, so I did.”

In December, he leaves Glenville. In February 2017 – on Valentine’s Day, to be exact – he flew to Fort Benning in Georgia for basic training.

“My mother was not very happy about that,” he recalls.

10 months later, just before Christmas, Schoonover was deployed to Afghanistan.

Schoonover returned home in June and remained in the Army. He began to take more leadership positions within the service, trying and earning a spot in the Recon Sniper Platoon and leading a team there.

When his time in the military ended in 2020, Schoonover focused on fulfilling his lifelong dream of playing for the Old Gold and Blue.

Schoonover wanted to follow in the footsteps of a Moorefield legend, Reed Williams. The former WVU linebacker cemented his name in Mountaineers lore as a centerpiece of the program’s successful teams in the late 2000s. In 2008, he was named defensive Fiesta Bowl MVP after leading WVU to an upset against Oklahoma.

“He’s been like a big brother to me,” Schoonover said. “Lots of mentoring and lots of talking outside of football…and how this is just a stepping stone in my life, my journey.”

However, reaching this stepping stone as a 23-year-old walker was not easy. Schoonover’s first chance to join WVU came in the early months of the COVID-19 pandemic for the 2020 season. Not only did WVU not hold a walk-in tryout that summer, but he had some compliance issues that kept him from joining the team anyway.

As Schoonover puts it, he had to serve “the Big 12’s punishment.”

Schoonover had to earn an associate’s degree with a 2.5 GPA in at least three semesters at a non-Power Five school. He instead went to work with a youth development group helping struggling children acclimate to the workforce.

Schoonover said he was bored with his life when he finished that job, but luckily a connection led to him getting a spot on the Potomac State baseball team. He played catcher for one season, appearing in 12 games and batting .350 with a .750 slugging percentage. Then, he thought, he was ready to head north to Morgantown.

Only one thing stood in the way of his walk-in essay at WVU: a science class. Schoonover did that, and then on the first day of school in the fall 2021 semester, he was in practice with the Mountaineers.

Schoonover became an important part of the team, despite only seeing the pitch in one game in his career. He led the Mountaineers out of the tunnel last season against Oklahoma State wearing the stars and stripes on Military Appreciation Day, and he’ll likely do the same on Saturday before facing off against Oklahoma. .

This fall, head coach Neal Brown wrote a letter to the Football Writers Association of America nominating the linebacker for the Armed Forces Merit Award, praising his leadership and attitude.

“[Wil] attacks his day with energy and a can-do attitude that has not only made him a favorite with his teammates, but also with West Virginia fans,” Brown wrote. “Part of your reward is based on community service and [Wil] knows the importance of this civic responsibility and never lets us down. He knows how to improve a person, how to motivate and how to connect with people of all ages.

Schooner was named one of six finalists for the award in October.

This attitude is evident as his team has gone through difficult times during his tenure. Of course, the losses bother him, but in the end he recognizes that the stakes on a football pitch do not affect those he has risked abroad.

“Here, you lose a football match, everyone wakes up the next day. You prepare, you eat,” Schoonover said. “In times of war, this is not the case.”