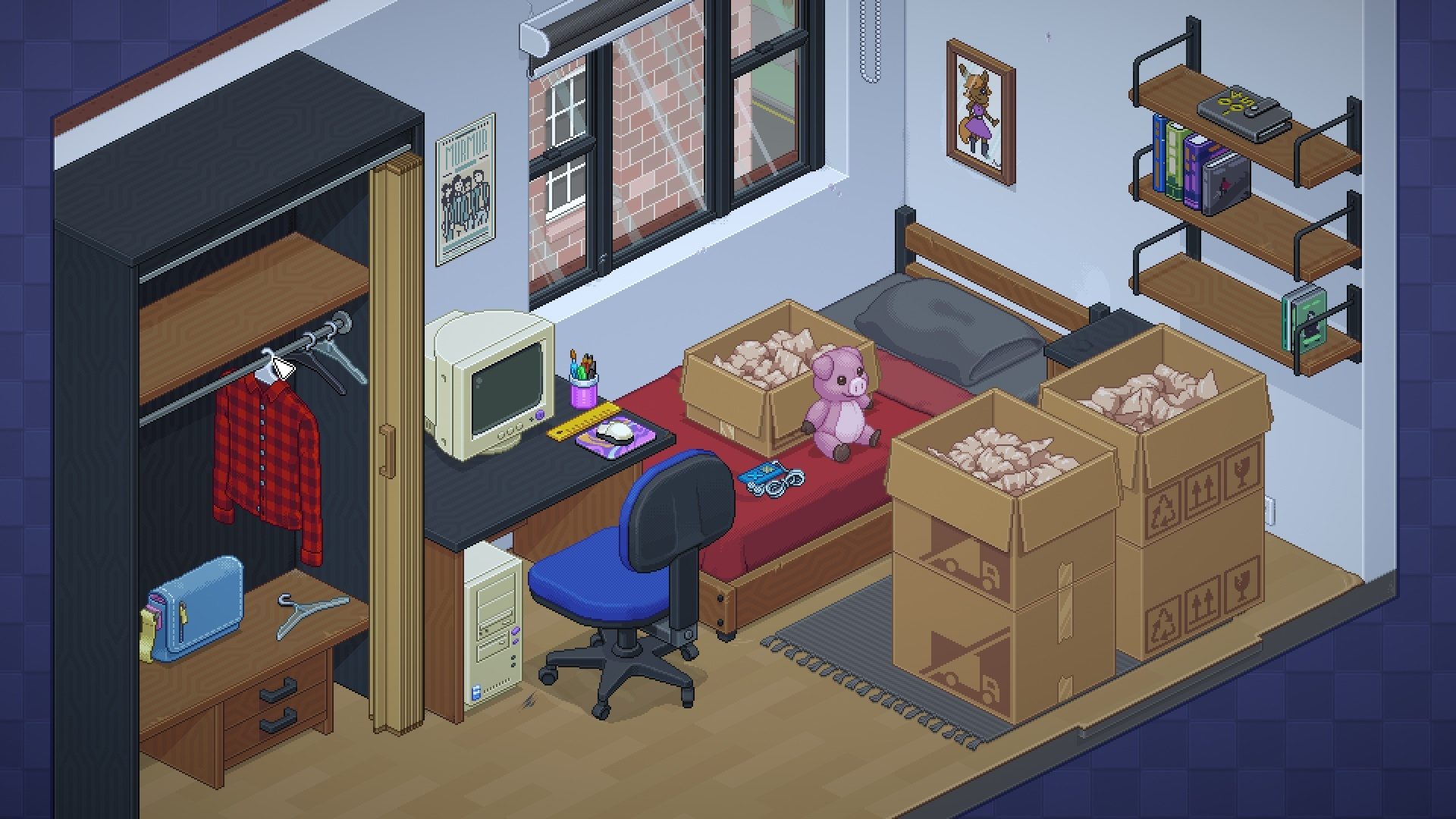 Good morning! I’m one of the developers who created Unpacking, a game about taking someone’s stuff out of the boxes and learning about that person’s life. People often describe the game as very personal, and we think it is, but personal can mean different things.

Items are personal to our main character and allow you to learn more about her and watch her develop over the course of the game. Items often have a personal connection to you, the player, as you encounter things that remind you your own life or those of people you know. And the elements are personal to us, the developers, because part of creating this game involved drawing from our own experiences and finding ways to add small details where we could.

The funny thing about this alarm clock is that it’s blank until you find a valid place for it, then it will flash “12:00”. If you interact with the clock, you can set the time, which is the time of the scene. You’ll see it change with the lighting outside the window as you unpack the remaining boxes.

If you move the clock again, the display turns off, then returns to flashing “12:00” when you set it. Alarm clocks like this often use a battery backup so they don’t lose time during short power outages, but I had one when I was younger and forgot to put a battery in it, so it behaved like the one in the game. Realism!

When I was seventeen, I thought it would be a good idea to start a webcomic about a group of young dragons living in a forest. It ran for over five years and two thousand comics. Although it never became particularly popular and is no longer online, the characters remain dear to my heart, so it meant a lot to have one of the main characters make an appearance in Unpacking in plush form!

This colored pencil set in a tin tray arrives alongside other art supplies, books, and evidence of the protagonist’s burgeoning pursuit of visual arts, but to me they remind me of a similar colored pencil set that I received when I was a child.

I don’t remember exactly how old I was when I got them, I just remember they were my treasure and they were labeled with something like “professional artist pencils” or something so grand that I felt like I was putting children’s crayons behind me. I was in the big leagues now!

Some time ago a friend introduced me to bouldering and I found indoor climbing really fun and interesting until I got injured! Still, I thought it was a great hobby for the protagonist of Unpacking to have picked up while she was studying, and it lent itself to some distinctive items – climbing shoes and the chalk bag. They’re especially great because they’re easily recognizable to people who know what they are, but end up feeling like mysterious oddities to everyone else.

The unboxing begins in 1997 and moves forward in time, so you experience wonderful moments like this level set in 2004 with a period-appropriate computer. Join us on a journey to the distant past where people still used cathode ray monitors without being a retro gaming enthusiast, and bought and used cool mouse pads. Marvel at the sound of spinning PC fans and delight in receiving an instant message from your friends.

These are just a few of the things that mean something special to me personally. I’m just part of the team though, and pretty much all of us have found ways to add something of ourselves to this game we’ve made.

We wanted an authentic experience because we thought that would be the best way to draw you into the story we wanted to tell. There are so many details and connections throughout the game, and we hope you enjoy discovering them for yourself when our game releases for PlayStation 4 and PlayStation 5 on May 10.