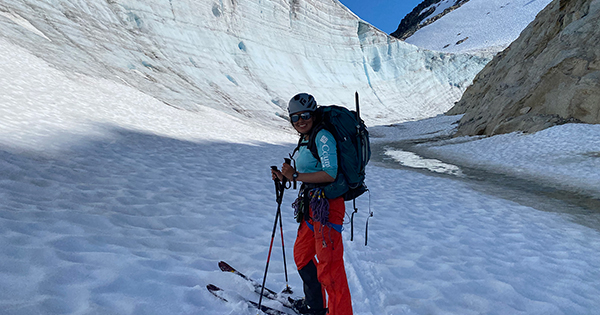 Life is tough on Alaska’s glaciers, and so is the reality of climate change | the edge

Anne Randall (CAS’22) was accepted into the Juneau Icefield Research Program in the summer of 2021. She skis here at Echo Glacier, a place between the glacier and a mountain where the ice has melted on the sides. Photo courtesy of Anne Randall.

Anne Randall, an undergraduate researcher at the BU, spent three months living on the ice and following the melting of glaciers

Imagine living on a glacier, in a remote wilderness, for three consecutive months. This is exactly what BU undergraduate student Anne Randall did in the summer of 2021 to collect ice samples, study the changing landscape of Alaska’s icefields, and to learn how climate change is affecting the world’s glaciers.

As one of 35 students from across the United States in the Juneau Ice Field Research Program (JIRP), Randall, an elder at the College of Arts and Sciences at BU, and her peers had a steep learning curve adjusting to life on the ice. She didn’t know how to ski until she got to Alaska and traveled to the glacial region on the outskirts of Juneau, nor how to safely traverse miles of snow-capped mountains and glaciers pocketed with crevasses and other dangers, somewhere else. But in the end, many blisters caused by worn ski boots later, Randall had learned to thrive in the extreme environment.

“It’s very different to read on [glaciers] than [it is] to see them in real life, â€says Randall, who is an earth and environmental scientist on the Climate Track. During a trip to Norway in 2019, she became fascinated by the cryosphere – areas of Earth covered in ice – after seeing a glacier for the first time. As she watched from the deck of a boat, a large chunk of ice broke off the glacier, crashing into the ocean. Soon after returning from Norway, she sought undergraduate research programs to study glaciers, and then was accepted into JIRP.

Life on the ice floe, though wet and extremely cold, was marked by times of natural wonder and beauty, she says. The teachers at the head of the JIRP group sometimes suspended their classes so that the class could watch spectacular sunsets paint the sky. And as the group crossed the tree line on their way to the first base camp, called Camp 17, they looked down and saw bald eagles circling in the valleys below.

â€œFull disclosure, I’m not a climber,â€ says Randall. “It was absolutely amazing breaking the tree line for the first time and starting to walk this rocky ridge.”

To prepare for the many miles of climbing and hiking – the first trek gained 6,000 feet elevation over 7 miles – Randall, a native of Pennsylvania, trained by climbing and descending large stairs at Brookline during the months prior to travel, and completed a training program offered by JIRP leaders to accepted students.

The JIRP program lasted from early June to mid-August, and the majority of Randall’s time was spent between three glaciers: Lemon Creek Glacier, Vaughan Lewis Glacier, and Taku Glacier, which is the deepest temperate glacier. and the thickest in the world.

Glaciers, often called rivers of ice, are made up of tons of snow compacting and turning into thick ice over hundreds or thousands of years. Due to their enormous size and weight, glaciers slowly crawl along the Earth’s surface, sculpting landscapes as they move. (Boston was at one point, thousands of years ago, covered with a thick layer of slow-moving glacial ice that created places like Cape Cod and Martha’s Vineyard.)

(Left) Randall is in a crevasse on the Vaughan Lewis Glacier, near a JIRP field camp called Camp 18. The students had to retreat into the crevasse from this site. (Right) The three skiers, Randall in the lowest position on the slope, were part of the search party measuring the position of the stakes placed on the Little Vaughan Lewis Glacier. Photo credit: Joshua Kelly

Scientists have used glaciers to better understand Earth’s climatic history, and as global temperatures rise due to human activity, changes in the world’s glaciers serve as crucial indicators to understand the current rate. of global warming. Melting glaciers are the main cause of sea level rise, and for more than 30 years, experts have found that glaciers are losing more and more ice, rather than gaining it, due to higher temperatures.

At JIRP, professors and students from across the country take part in the annual research trip to complement the growing body of research on the evolution of these glaciers. Randall’s class was the first to take place during the COVID-19 pandemic. Upon arrival, the researchers split into groups of three to quarantine for the first two weeks, test for COVID-19, and make sure every team member was in good health before leaving for their sites. sea â€‹â€‹ice research, accessible only by a helicopter which could take seven days to arrive depending on the weather. For this reason, students also learned backcountry safety, mountaineering, and navigation skills as crucial parts of their introductory lessons.

â€œIt gets weird the further away you get from the ice field,â€ Randall says. “Because there is nothing to support life thereâ€¦ it almost feels like another world.” Despite the harsh and desolate surroundings, to Randall’s surprise, delicate and iridescent feathered hummingbirds occasionally flew on their southern migration paths.

An isolated camp on the ice floe. Photo courtesy of Anne Randall.

â€œIt’s amazing to see the organisms that have adapted to survive there,â€ she says, like heather plants, types of shrubs that grow in the rocky soil between ice caps, able to survive in being completely covered with snow. And during the months of isolation from anyone, Randall and the group bonded over various challenges, like digging a hole in the ice to expose a layer of grainy ice called a nÃ©vÃ©– and all there is to learn when living in an unfamiliar place.

She and the JIRP team got used to getting around mostly on skis or hiking in ski boots, often with ice picks on hand for jamming and various types of field work. Randall has spent much of his summer setting up markers with GPS locators to track the position of the glacier, document ice loss, and monitor snow accumulation on parts of the various glaciers.

â€œAlaska’s glaciers are going to be affected by climate change very, very quickly, so it’s very important to understand the rate of melting,â€ she says. Measuring glaciers using remote sensing technology, including satellite imagery, is the most common way for researchers to track the speed of movement of glaciers, says Randall. Part of the project was to ensure that the ground stakes matched the satellite data.

This is one of the many glacial lakes Randall and the JIRP team encountered on glaciers, all of varying size and depth, and some lakes even contained icebergs. Photo courtesy of Anne Randall.

At the last camp where the crew spent time, Randall recalls seeing a lot of active ice falling from the glacier, an exciting part of the JIRP experience. â€œThe sound of the glacier creaking and breaking up sounded a lot like thunder,â€ she said. â€œI would sit on the rocks and watch the ice fall. ”

These days, in his final year at the BU, Randall is more likely to be near water than ice, studying eelgrass beds along the Massachusetts coast. Eelgrass is a type of algae that mitigates flooding and is home to small marine animals. Randall gets a minor in marine biology, but eventually hopes to return to the cryosphere to visit other glaciers threatened by climate change.

Despite the fact that most people live far from the arctic ice fields, “we do a lot of things that have a direct impact on glaciers and influence global warming,” says Randall.

One of the biggest lessons she learned from the JIRP experience was the importance of communicating the urgency of climate science to people who don’t understand its complexities. “It’s hard to try to understand this long and complex history of changes in the environment and how we deviate from what is normal, and also to get people to believe you.” But we have to try, she said.