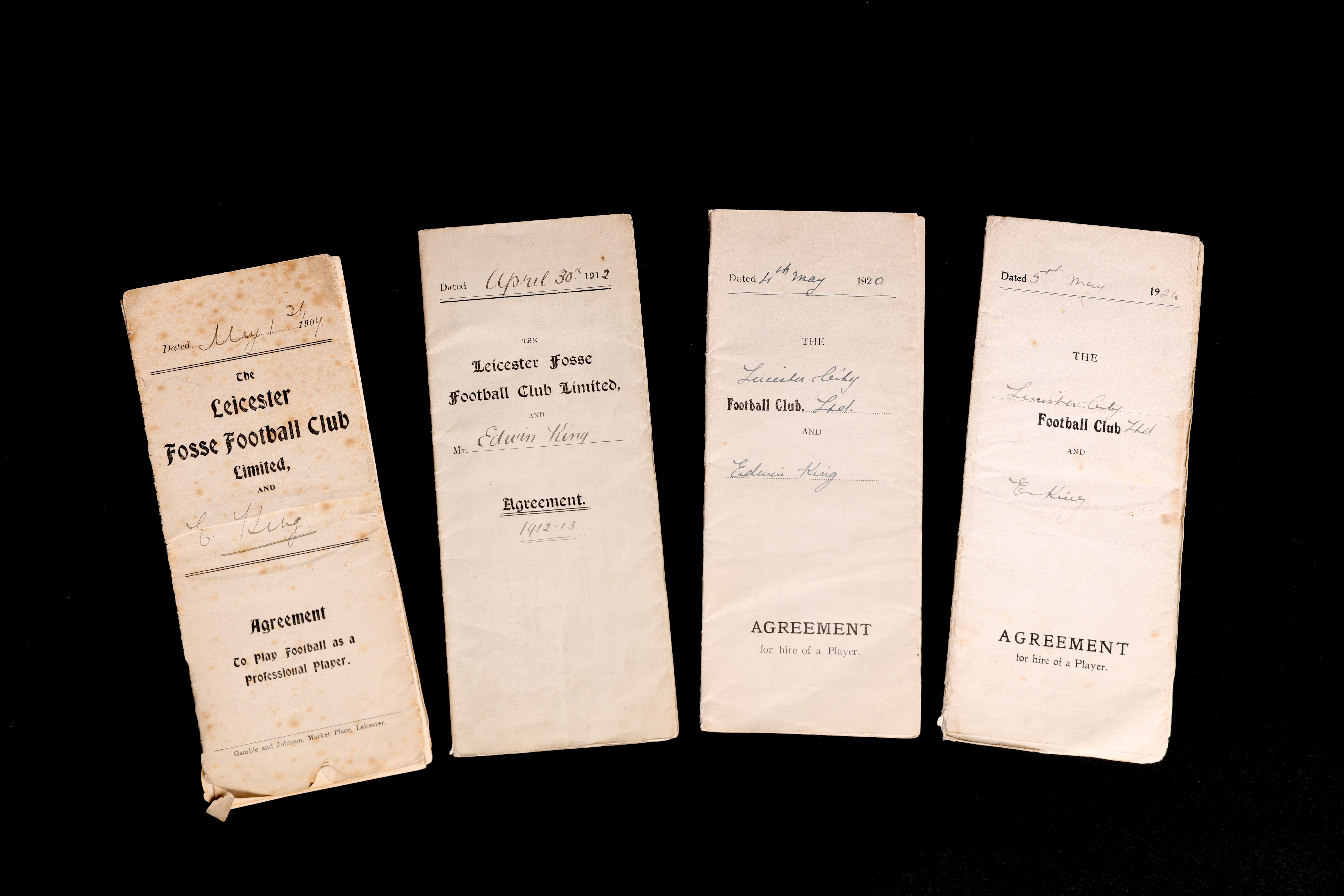 Links to the past: Edwin King’s contracts

Club historian John Hutchinson’s Links to Past series continues with a look at some of the contracts of Teddy King, a major figure in Leicester Fosse and Leicester City history.

Between 1906 and 1932, Teddy (Edwin) King was a key and long-standing member of the Football Club. He made over 350 appearances for Leicester Fosse and his successor Leicester City before joining the coaching staff in 1924. He also played for Leicestershire County Cricket Club.

Five years ago Teddy’s grandson Kelly Allen of Newcastle provided us with numerous Teddy contracts with the Club.

These fragile, yellowed documents provide a fascinating glimpse into the life of a professional footballer 100 years ago. They indicate that the coach had complete discretion as to how best to keep the player in the best physical condition. They state that expenses incurred for training and play should be covered by the players. They also insisted the player lived in Leicester (revealing Teddy lived at 38 Windemere Street and then 125 Filbert Street).

Each contract was renewed annually on May 1. Teddy made his first-team debut, as a late replacement, against West Bromwich Albion in April 1907. His reward was a contract which paid him £ 1 per week with an additional £ 1 per week “during periods when the player is withdrawn from his work (in the shoe industry) by the Club “.

The following season, playing in the reserves, Teddy won £ 2 (£ 1.50 in the closed season). Then, as he became an established first teammate in the six years leading up to the cessation of league football in April 1915, due to World War I, he was earning between £ 4 and £ 4.50 a week , with end-of-season incomes varying between £ 2 and £ 3.50.

In the five years since the war, Teddy’s earnings were typically £ 6 per week (£ 5 in closed season). For the first three seasons, Teddy, a regular on the first team, received a £ 1 bonus for playing matches, as well as for winning and drawing. He continued to earn £ 6 a week for the next two seasons while playing only for the reserves.

After eight years as a coach and 26 years after signing for Leicester Fosse as a player, Teddy left Filbert Street in 1932.

Kelly sent us four complimentary references written by Peter Hodge, the Manager, and by three directors, LH Burridge, WH Squire and MJ Rice. Even the letterheads tell a story. They say Burridge partnered up a hosiery factory with fellow director Dick Pudan, a former Pit player, and that MJ Rice, who ushered in the Rice Bowl Trophy, still played annually by local schools, had the impressive Crown Sole Plate boot. factory in Syston.