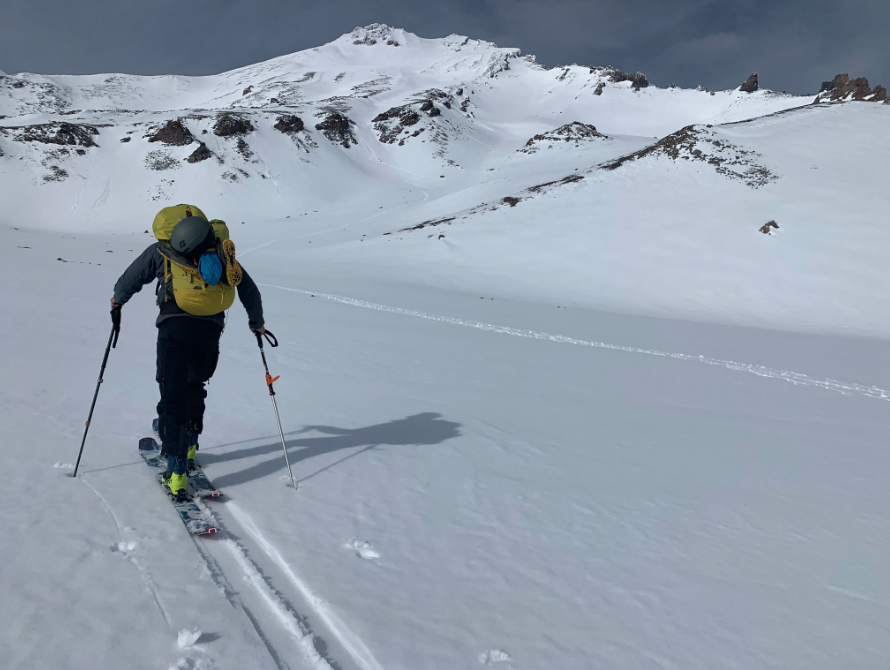 Report dated May 15, 2022 and written by the Blackbird mountain guide team

Blackbird mountain guide Ali Agee checked in today with an update on the last two days of mountain skiing in the Hidden Valley area! For those of you who don’t know, Hidden Valley is west of Avalanche Gulch, just above Casaval Ridge, and sits at the base of Shastina and the west face of Mount Shasta.

We started our approach from the Bunny Flat Trailhead with tennis shoes, and wore them to Horse Camp where we switched to ski boots and started skinning. Our hopes of stripping down to Hidden Valley from Horse Camp were quickly dimmed after about fifteen minutes of carving through a mixture of snow, rock and dirt. We opted to take our skis off and take the summer trail rather than try to climb higher through scree fields with minimal snow cover. With each slight change in aspect, we hoped the snow cover would become heavy enough to start flaying again, but alas, we arrived in the beautiful and remote Hidden Valley after walking the somewhat snowy summer trail in our ski boots for an uncomfortable period of time. weather.

After an incredibly warm and comfortable night at camp and a full moon so bright it looked like lights were shining in the tent, we started to carve 10,000 feet at 6am. Despite a good refreeze overnight, the snow surface was textured enough that we could have good grip while scaling without using ski crampons. We hiked comfortably to 11,200 feet where we switched to boot crampons and started 2,000 feet to the top of the West Face, putting our ski mountaineering skills to good use on Mt Shasta! On the ridge, we were greeted by southwest winds so strong we could barely stand. Looking at Misery Hill, we could tell people were moving comfortably despite the wind and heading in that direction. As the quality of skiing on Misery Hill generally seemed miserable, we left our skis at the base. Jumping into the well-tracked Misery Hill starter pack, we were at the top before we knew it. Even though it was too windy to get up, we traded photo ops with another group at the top and started the descent.

We hiked back down to the base of Misery Hill and picked up our skis. Coming back to the top of the west face, we quickly fell over the ridge before the winds could knock us down again. Excited to have our eyes on our ski descent, we were quickly greeted with no visibility in a complete whiteout. Making sure to stay close together, we made a few turns through a punchy and unbearable crust of wind before stopping to regroup several times. The skiing was difficult although bearable in some places. Around 12,200′, the skies opened up and the snow softened – a mix of hard-hitting windsurfing and creamy powder. Finally, we could open it up and ski how we wanted. But not for long! After a few nice turns, the snow quickly turned into powder, which made you want to wax your skis more frequently, although waxing probably wouldn’t have made a difference anyway. Back at camp at 10,000′, we ate salami and cheese and started packing our things.

Not wanting to endure the less than ideal conditions on the summer trail out of Hidden Valley again, we decided to hike up Casaval Ridge to descend into Avalanche Gulch for a snowy ski descent rather than a painful hike. and steep in ski boots. Working from Casaval Ridge to the ravine proved difficult, given the ideal conditions for wet avalanches and exposed rock. With only a few new scratches on our ski bases, we descended into the ravine and carefully skied our way through sloppy mashed potato conditions until we couldn’t ski anymore due to lack of snow. The skis dropped about 8400 feet and we hiked again in ski boots about 500 vertical feet to Horse Camp where we reverted to tennis shoes. After a few miles of trail to Bunny Flat, we ended the day with beers and dill pickles.

If you want to ski Mount Shasta this season, the time has come! It’s going to be another sunny and warm week!