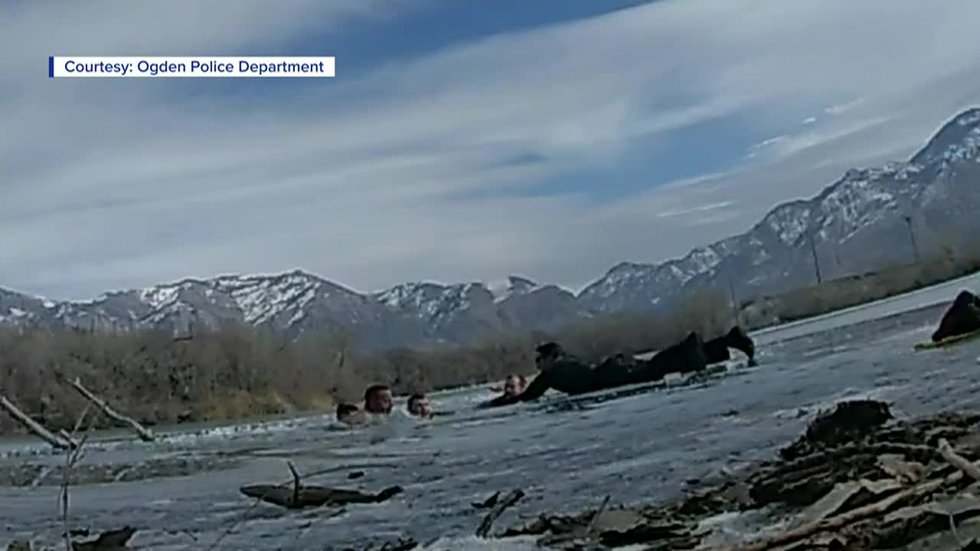 OGDEN, Utah (KTSU) — Body camera footage captured the chilling moment some Utah officers rushed to help a teenager who fell through the ice and then fell through himself.

On Wednesday, Ogden police rushed to the edge of a pond, ready to help a teenager who was struggling to stay afloat.

The teenager’s friend, who had also fallen into it, had already managed to make it back to shore.

Martin Kolman was passing by and was the first to crawl onto the ice to help the teenager. His dog Enzo also jumped into the water.

“I water ski, so I ski on this lake until it freezes over. So I know most parts of the lake, how deep it is, that in cold water, if you’re calm, you can stay there for a bit,” Kolman said.

Kolman ended up getting into the water himself, with two officers from Ogden trying to pull them out.

Lt. Mark Horton of the Weber County Sheriff’s Office pulled out throw bags to help the men out. He too fell through the ice.

“The adrenaline at that point was so high that you just keep working through it,” Horton said.

Eventually, all were able to get out of the water, with only a few cuts and scrapes from the ice.

Although the ice seemed stable in some places, the warmer weather this week makes walking unpredictable and dangerous.

“We cannot determine the integrity of the ice just by looking at it. So it’s definitely dangerous,” Lt. Will Farr said with Ogden Police.

Farr said he was grateful that people walked down the trail and saw two teenagers fall into it.

Kolman returned later that evening with Enzo to remove his shoes from the ice.

He even met the teenager who fell and was happy to see he was okay.

“I mean that’s the main part, just glad he made it out alive and he’s okay,” Kolman said.