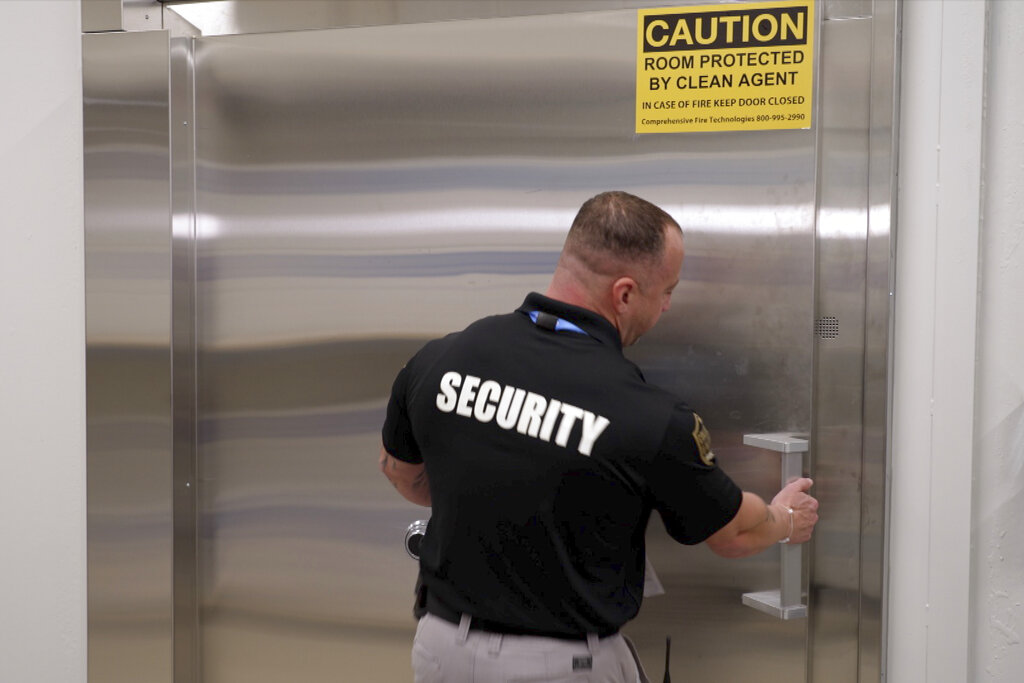 The plain brown-brick building, tucked away on a nondescript block on a Delaware street, probably wouldn’t attract much attention if it weren’t for the barbed wire and armed guards outside — clues that something important was inside, maybe even valuable.

Fort Knox it is not. But the storehouse of collectibles that the building contains is definitely worth keeping.

There’s a rare Pikachu card and a century-old baseball great Honus Wagner card, which recently sold for $7.25 million in a private sale. In addition to trading cards, there are baseball bats and basketball shoes, including a pair of sneakers worn and signed by the late NBA great Kobe Bryant.

A total of $200 million worth of collectibles are stored in two vaults inside the building, equipped with some of the latest technology to protect the valuable cache from damage or thieves.

“A lot of people don’t keep jewelry at home. They keep it in a vault,” possibly in a secure bank, said Ross Hoffman, CEO of Goldin Co., a division of industry giant Collectors, which operates the vault, a high-tech facility. security specializing in the protection of collectibles. .

The building has no signage and the company has requested that any clues to its location not be disclosed. Inside is a technologically advanced facility with a guarded vault, equipped with seismic motion detectors that will trigger the alarm if someone tries to break through the walls with a jackhammer.

To move from room to room, a security guard leads you through a card-activated double-door entry gate, letting the first door close before moving on to the next. There are surveillance cameras everywhere.

Behind one of the two 7,500-pound (3,400-kilogram) vault doors, each more than a foot thick, are rows of shelves that extend to the rafters of the building. Rows and rows of boxes are filled with collectibles, some of which have relatively low monetary value but hold sentimental value to their owners or may one day be worth much more.

Interest in sports collectibles and memorabilia has exploded in recent years, not only for big-ticket items, but also for rediscovered pieces that had been hidden away in attics or basements. In August, a mint condition Mickey Mantle baseball card sold for $12.6 million, surpassing the $9.3 million paid for the jersey worn by Diego Maradona when he scored the controversial goal of the ” Hand of God” at the 1986 FIFA World Cup.

“A lot of times people have collectibles for bragging rights to show them to other people so they can go, ooh and ahh,” said Stephen Fishler, founder of ComicConnect, who observed the growing increase – and profitability – of traded collectibles. through auction houses.

But some people don’t want the burden of being responsible for securing their property, which they view as stock-like investments, Fishler said. These storage facilities help to better liquefy collectibles by treating them as assets that can be more easily bought and sold.

Hoffman, whose parent company also runs one of the leading grading and authentication services, said his new venture is a recognition of the big bucks involved in collectibles.

Before the pandemic, the sports memorabilia market was estimated at more than $5.4 billion, according to a 2018 Forbes interview with David Yoken, the founder of Collectable.com.

By 2021, that market had grown to $26 billion, according to research firm Market Decipher, which predicts the market will grow astronomically to $227 billion within a decade — fueled in part by the rise so-called NFTs, or non-fungible tokens, which are digital collectibles with unique encrypted fingerprints.

Although digitized NFTs do not require vaults to keep, the trade in physical collectibles is expected to remain active and lucrative.

“For a lot of people who buy cards, they intend to sell them,” Hoffman said, “so keeping it liquid and safe is a good thing.”

Need money right away? PaydayPot emergency loans can be beneficial