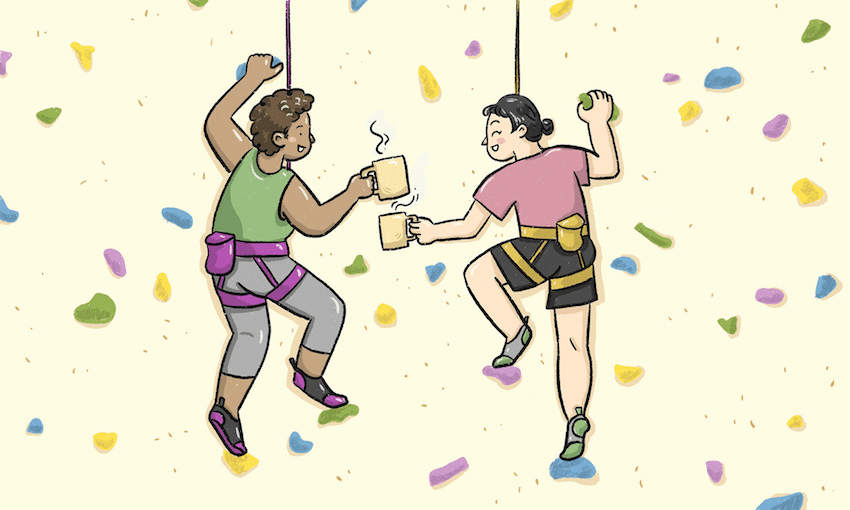 Sunday Essay: Friends on a Rock

A woman finds comfort and friends on the side of a cliff.

I started climbing shortly after my 30th birthday, and I swear to God everyone I know is climbing now. Apparently there is a phenomenon that you buy a car and start noticing this car model everywhere. I haven’t owned a car in almost 10 years, but every time I go on social media I see that another friend has discovered the block. When I share a photo of me on the rock, another friend confesses in my DMs to love ropes and belay devices. It’s been 18 months since I started climbing and everyone around me is a climber, or a potential climber.

Broadly speaking, rock climbing comes in two main forms. One is bouldering: low ascents of less than six meters that can be done safely without a rope. What the boulder lacks in height, it makes up for in difficulty. The boulder can take the climber upside down, the weight hanging from their toenails, performing simian movements by matching hands to feet. The other type of climbing is on routes too high to fall safely, and is therefore usually done with a rope, unless you are Alex Honnold and you can climb all 884 meters of El Capitan without any protection. But for ordinary people with functional tonsils, a rope is necessary equipment for climbing walls.

Indoor bouldering is a relatively modern invention and the type of climbing I practice most often. Bouldering gyms are basically Lollipops Playland, but for adults. The gyms feature white walls adorned with shapes in the bright colors of the rainbow. Climbers bask on the thick mats under the walls, generating clouds of BO and chalk. The sound system plays bands like the Arctic Monkeys, LCD Soundsystem and Modest Mouse, a reminder that people my age are now in low-level management. I have climbed most bouldering gyms in the country and like the malls in Westfield they all look the same.

As with many physical activities, it’s hard to explain the appeal of rock climbing without experiencing it. There’s the way it offers razor-like focus. Your field of vision narrows, the din of the music fades, it’s just you and the 5 to 15 plastic holds that make up the course. There’s the social element, where people of all sizes and abilities chat and support each other in their climbing endeavors. There’s the addictive and fun quality to the activity: there are different levels (grades), maps (crags) and items to carry in your inventory (outdoor climbing gear). You are the main player, and it’s up to you to increase your strength, endurance and flexibility stats.

Climbing produces an evangelical fervor in its practitioners, especially if they have recently become accustomed to it. I heard the right word at a dinner party, where a friend proselytized everyone about his new found love for rock climbing. He delivered his message with such passion and enthusiasm that we all decided to give it a shot. His timing for inducting new climbers couldn’t have been more impeccable: it was June 2020 and everyone was recovering from the first lockdown and thirsty for new things to do. Within two months, our group of friends had become a climbing group. A group chat called “Social Climbers” has been started. Jargon like “flash”, “sent”, and “sandbagged” began to appear in our language with each other. We’ve all become obsessed with the motion of climbing a wall over and over again.

People my age often lament that it’s hard to make friends as adults, to which I reply, “Have you considered rock climbing?” I started climbing because my friends were doing it, but I made so many new friends. It is true that new friendships between adults are difficult to build and unfortunately often deprioritized in favor of romantic relationships. After leaving the repetitive confines of education, it is difficult to obtain that regular, passive social contact which is a requirement for friendship. But hanging out at the climbing gym provides that environment as an adult. The chatter comes easily when you have a bouldering issue in front of you to start a conversation, and slowly the little asides people give about their lives turn into a fuller picture of their lives in and out of the climbing gym.

Thanks to this shared love of climbing, I now have many activity-based relationships in my life. When I was younger, I didn’t understand and maybe didn’t judge people who had these kinds of relationships. At the time, my relationships with people were mainly based on feelings, in which we drank coffee and analyzed at length what was happening in our lives. The intensity of those exchanges made the moments meaningful, and I felt like people who got together just to play ping-pong or whatever weren’t really friends. How can hitting a ball compare to showing each other their hearts? What can you learn about someone by doing an activity together?

In outdoor climbing, one person climbs the route and the only person remains on the ground and manages the tension of the rope which ensures the safety of the climber. One of the main differences between indoor and outdoor climbing is how far you can potentially fall and how safe those falls are. Rock climbing outdoors is like that confidence exercise where you fall backwards into your friends’ arms, except the fall can be uncontrolled and you can hit something on the way down.

I started climbing outside with the same group of dinner friends. None of us had any climbing experience outdoors. Outside of the safe and sanitized experience of indoor climbing, people’s personalities had much stronger influences. We were all climbing the wall, but some of us were taking more than others. Watching a friend attempt an outside route, I could read all of his strengths and weaknesses in the way he approached the climb. The friend I knew to be more risk averse climbed fearlessly, climbing with motivation to reach the top rather than climbing to avoid falling. The most anxious friend needed constant communication while climbing. Activity intensity highlighted emotional responses that were more easily controlled when nerves were not frayed. Climbing outside revealed a brutality I hadn’t seen much from my friends in a while, a brutality I myself hadn’t felt since I was older and had basically learned to manage my feelings.

The outdoor climbing introduced a schism in the group of friends, as it left some uncomfortable with the level of risk. Unlike indoor climbing, all safety precautions and knowledge (or lack thereof) had to come from our herd of beginners. After a while, only two of us remained keen on climbing outside, with the two of us being dubbed the “riskiest” by the rest of the group of friends.

Maybe it comes from my apparent daredevil, but personally I don’t think outdoor climbing is that dangerous. It’s not so much about taking risks as it is about managing risks. Really, the trait that I think connected us to two remaining outdoor climbers was our propensity to be completely overwhelmed by an obsession. Indoor climbing is pure physical pleasure. But outdoor climbing requires technical knowledge of esoteric topics like knots, anchors, and rope management. For some this introduces a tedious level of detail, but for me this kind of complexity has always made my brain fizz in a particular way. I appreciate the Rube-Goldberg nature of outdoor climbing, the satisfaction of having completed each step perfectly and, above all, the inconsistency of it all. Climbing this wall is a very personal achievement, and there is nothing to gain or lose for others if I can complete a climb.

On rock climbing trips, I lie in my tent at night, my hands throbbing, and in my mind is the image of a rock face. There are chalky pockets and the slight stains of rubber-soled shoes. Daily worries are gone. There is a peace that comes from not being able to think of anything else. Being able to cultivate an adult hobby is a valuable experience. They are the new substitute for dogs, the previous generation’s substitute for children inaccessible to this generation of tenants. They are a source of meaning, a way to prevent everyday life from seeming banal, a way to understand yourself and the people around you. I’m sorry for being an active relaxer and my favorite obsession is rock climbing. I hope you all have something meaningful in its uselessness to do.

Do you like the Sunday Essay series? Be sure to check The Sunday Essay Postcard Set in The Spinoff store. The set includes 10 original illustrations from the series with artist previews.