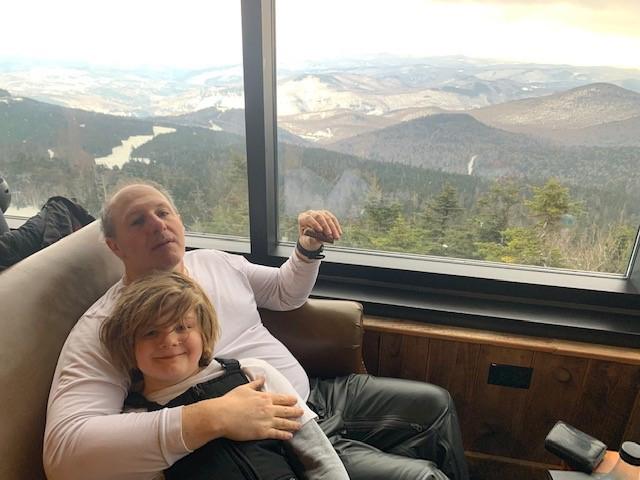 The problem with skiing is that we love it, remember?

In the quiet days after Christmas, I hosted a small dinner party for a friend’s birthday. This friend had just returned from England, where she spent her birthday sick with COVID-19 and in confinement with her mother. It was time to do it again.

I gave her one of these sets of “Conversation Cards” called “Healthier Together: the Deck; Conversations for Creating Your Healthiest, Happiest Life.

“It’s a terrible gift,” my husband Ian told me. “It’s like saying ‘Not only are you incapable of coming up with topics for conversation, but you are also unhealthy and miserable.‘.” At that point, I told Ian that I had bought one for him too.

I’ve never liked conversation cards, but this one was different. It had been created by one of those atrocious women who end up building businesses out of their kitchen sink while raising five children – but its cards were deadly.

There was a long pause, then she narrowed her eyes and in a barely audible tone, she hissed, “Ski.”

I love skiing, but I totally got it. And the other two women at the table too. Wasn’t skiing my favorite sport?

It’s important to note that all of these women had children, so skiing isn’t what it used to be. Gone are the days of alpine wonders, mogul races and après-ski massages.

With the offspring in tow, all of that is replaced by searching for the ever-missing glove while struggling against the ground like crocodiles in an effort to put impossible-sized ski boots on kicking feet – for taking it off 20 minutes later because of the bathroom, the cold and the sudden need to eat and drink. It gets better with age, but not really.

The problem with skiing is that we love it, remember?

Like childbirth, the discomfort of skiing is often overlooked until it’s too late. This year I thought about the snow forecast, the general mood of our team and planned what I thought was a slam dunk.

Ian and the boys (Louie 13, George 10) would leave for Killington on Monday and ski mid-week, while my 12 year old daughter Selma and I would join them for their last day. Selma didn’t have the week off, but my plan got her in on the action while avoiding Sororicide. We’d beat the holiday crowds, catch some snow, and three days wouldn’t kill anyone — despite going to a mountain called KILL-a-ton, as George pointed out.

Selma and I arrived in Killington on the third day after sub-zero winds and pure ice began to melt in a sudden subtropical “temperature bomb”.

“Think about it, we won’t have to wear diapers,” I said happily, as we arrived at what looked like a giant mudslide disappearing into the night at 60 degrees.

We figured one night with an extra person in our hotel room wouldn’t kill us, even in Kill-a-ton. It has become a habit to build George what we call “a nest” – which is basically a huge pile of blankets on the floor. What I didn’t realize was that George flew over the nest in more than one way – and on top of that Louie refused to take the couch off for some unknown reason related to his self-image.

There was literally no room for Selma and I to walk when we arrived. The boys had ski stuff all over the room – which immediately turned into a shouting match culminating in that old refrain of, “Mom, as soon as you come in, you ruin all.”

“So maybe we should just go,” Selma said looking up, her eyes suddenly shining.

“Stop the mommy drama, you’re not leaving!” Ian shouted, sweating through his adult-sized jumpsuit. Ian thinks this particular onesie insulates body heat the best at its maximum capacity, so it’s become a mainstay in his winter wardrobe despite being covered in giant candy canes. Now that it was downright soft, the onesie worked more like an infrared sauna pod.

To claim her right, Selma stowed her miles of toiletries in the bathroom while I tried to set up camp on the ground just below Louie, who lay like the Maharajah on the sofa bed not fired.

Our room was right next to reception so the fact that we were smuggling an extra child in was stressful enough, but when George decided it would be hilarious to pretend we had also smuggled in a pet iguana named Brutus, this pushed Ian over the edge. That’s when we realized Ian’s blood pressure medication was missing.

“Every time you arrive somewhere, everything happens disappeared like magicI mean, it’s amazing my medicine was RIGHT HERE,” Ian shouted at Selma and me as he was dripping with sweat.

“Dad, you need to calm down,” Louie said, with vague disgust from across the room.

“I CAN’T relax, that’s the whole point,” Ian yelled as he rushed down the hall. “It’s my blood pressure medicine.”

“Can you please come back into the room?” I told him, looking nervously at the reception. “Your medicine is not going to be in the hallway.”

“Dad,” Selma said, “do you realize you’re a grown man screaming about your meds in a candy cane jumpsuit?”

“Yeah, dad,” George shouted, “imagine what it’s like for other people! Especially with Brutus!

Ian gave up in a fury and eventually we all fell asleep to the sound of whispered concern from the staff, who avoided us like the plague the next morning. I dreamed of being stuck in a snow/mud avalanche until I realized it was a stunt of Louie’s sweaty Under Armor clothes.

“We call it Vermont’s Old Corn Slide,” a man on the chairlift told me the next morning, as we stared at the patches of ice, mud, and rock that made up most of the mountain.

Apparently, “corn” is a snow condition that occurs when there are drastic changes in temperature; everything melts, refreezes and then is stirred again by the snow groomers into small pieces, which had just happened. Skiing on corn is like having jackhammers on both shins while your feet are slowly squeezed into a screw clamp.

When I met Selma in the bedroom, it was clear from her TikTok posts that not only was her foot not broken, but she had also found her father’s blood pressure medicine under her balm of beauty. It took him a few minutes to realize that maybe I should take one, that maybe I needed to “calm down too.” She even gave me a face mask.

Because I love skiing; and the day had just begun.

Claire Tisne Haft is a former publishing and film executive, raising her family in Greenwich while working on her own on books and films. She can be reached at [email protected]