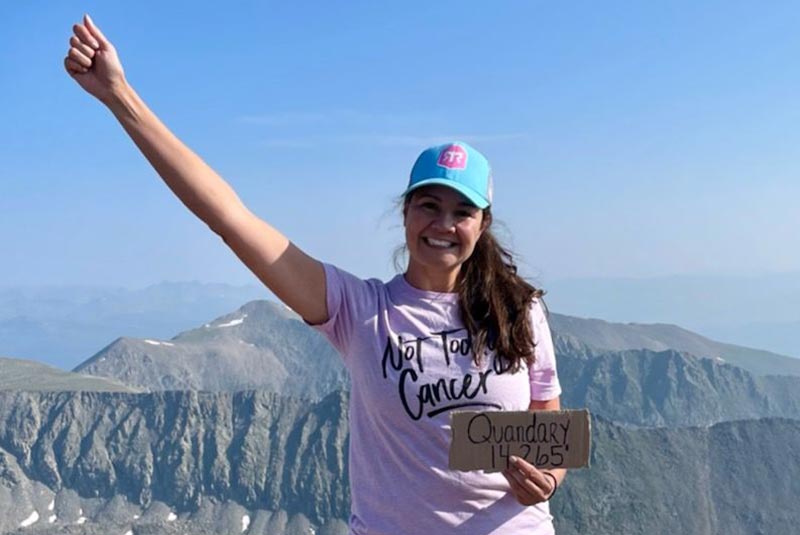 When Melissa Long arrived for her final chemotherapy treatment for stage 3 breast cancer, she took a deep breath, tried to stem her mounting anxiety – and then settled in for the trip of a lifetime.

Or more precisely, the journey for his life.

The 47-year-old Aurora resident put on a pair of virtual reality (VR) goggles and with her partner Kevin Welsh by her side, she traveled the world on a virtual tour that helped her distracting herself from the tremendous terror she faced after a culmination of a year of difficult medical treatment.

As he held a “flying” computer tablet and selected various destinations, Long’s body never left the reclined padded seat on the third floor of the UCHealth Lone Tree Medical Center.

She traveled to Antarctica, where a colony of playful penguins made her laugh; to a gurgling stream that sparked memories of beloved Colorado mountain hikes; to a serene beach that reminded him of his childhood near Lake Michigan; at a swamp game where alligators were biting at his feet.

“I swear it immediately transported me to a better, happier place,” she said. “For me, it was so cool. The VR experience really took me there.

This simulated ride gave him some well-deserved moments of respite and escape after a year of darkness and despair. A self-proclaimed Type-A go-getter, she was more used to spending her summers climbing the state’s 14ers and her winters skiing.

“It was a real trip. But there were also some upsides to my experience. I feel so blessed that we landed at UCHealth and have an amazing team – they were phenomenal.

Long is a strategic account manager for HOKA, an athletic company that makes running shoes designed specifically for stability in challenging terrain. Her life has been similarly tested over the past 16 months, as she has had to navigate through bumps, curves and low valleys before catching sight of the mountains again.

Sidelined and blinded by cancer

It was March 2021, and while she was hoping Covid-19 vaccines might bring some normalcy back to her daily life, Long felt a lump in her left breast. She had just turned 46 and due to her age and healthy lifestyle, she was hoping for the best. But she had reason to worry: her paternal grandmother died of ovarian cancer aged 47 and her paternal aunt died of breast cancer aged 43.

After a series of tests including mammograms, ultrasounds, biopsies, breast MRIs, genetic testing, echocardiograms, a CT scan from neck to pelvis and a full bone scan, the news confirmed her worst fears: Long had cancer. stage 3C triple negative breast. . The cancer had spread to nearby lymph nodes and was classified as grade 3, meaning the cells were “growing aggressively”, the doctors said. She also tested positive for the BRCA1 gene mutation, which puts her at increased risk of breast or ovarian cancer recurring in her lifetime.

She ended up in the care of Dr. Virginia Borges, who specializes in young women with breast cancer at the UCHealth Diane O’Connor Thompson Breast Center on the Anschutz Medical Campus in Aurora.

Borges and his team of caring providers outlined a treatment regimen that included drugs, radiation and surgery to fight his cancer.

“We caught him in time. It was still scary,” Long said.

While on a summer trip with Welsh to see family in northern Michigan, the couple decided to put their illness behind them for a few weeks as they enjoyed the splendor of the area’s natural beauty in a van rent.

After returning to Denver, Long began a grueling medical regimen that included two types of chemotherapy as well as immunotherapy, which left her feeling nauseous, exhausted and weak. Immunotherapy is sometimes used with chemotherapy as a way to use a patient’s own immune system to fight cancer.

His suppliers were encouraged, but the battle took its toll. She lost her appetite, her characteristic energy, her beautiful mane of black hair. Her treatments were halted when she had allergic reactions to the powerful drugs, and she ended up in the ER more than once with low white blood cell counts and battling high fevers.

Finally, as she neared the end of necessary chemotherapy treatments, she faced one last enemy: adriamycin. Nicknamed the “red devil” for its potency and cough syrup color, the drug has a well-deserved reputation for making patients nauseous. This latest round of chemo hit her harder than the previous ones, even with the drugs the nurses gave her to reduce side effects.

“Not all chemotherapy drugs are created equal,” said Shannon Tejchma, nurse in charge at UCHealth Lone Tree Infusion Center. “Adriamycin is a very effective drug, but unfortunately it can make patients very sick. It’s the last thing we want, especially when we have the tools to make a difference.

This is where Long’s virtual odyssey began.

“The idea behind using virtual reality is to totally distract patients, transform them and transfer them to another dimension: to the beach, in the woods or simply to a place where their mind is elsewhere”, said Tejchma. “They can turn themselves into what they’re looking at, rather than a nurse pushing chemo into their IV.”

Since then, UCHealth has delivered more than 17,000 experiments on everything from distraction therapy for patients receiving chemotherapy or other infusion medications, to use for burn patients, and by wound care providers. and pre-surgery.

“We put this device on their head and take them somewhere else,” Caputo said. “The technology is endless and there are so many opportunities for us to use it.”

For Long, the idea of ​​using virtual reality to help tame her anxiety before her chemo treatment was appealing. And when Tejchma handed her the glasses and with Welsh as her virtual driver, she was able to shake off the stress that had gripped her during previous periods at the infusion clinic.

“It seemed to distract her from her immediate fears and let her relax a bit during her procedure and infusion times,” Welsh said.

Long’s subsequent surgery – a double mastectomy and the removal of part of her left lymph node, brought her back to reality. But this time the news was better than she could have imagined. The pathology report showed no signs of cancer in the tissue that was removed.

Now she balances her optimism with the knowledge of what is yet to come: monthly immunotherapy infusions through September, reconstructive surgery and later this year the removal of her ovaries and fallopian tubes due to diagnosis of BRCA1. She will also likely be on a beta-blocker indefinitely due to the cumulative effect of the drugs on her heart.

But Long is determined to become the person she was before finding the lump, before chemotherapy treatments, before being diagnosed with BRCA1, before heart disease. Perhaps even After than before. She is, after all, a graduate of Michigan State University, where the mascot is the brave Spartan warrior/athlete.

She has a lot of fans supporting her: her family, her friends and the Welshman, who was by her side during the long battle.

“Witnessing her spirit, her fight and her determination has been incredible to watch and be a part of – she is a miracle,” he said. “You have this baby!”

And with her hair growing back just as thick and dark as before, she’s determined to get back in the arena too, sooner rather than later if she has a say in it.

She looks at a photo from last summer, as she smiled, surrounded by girlfriends who climbed with her to the summit of 14,265ft Quandary Peak.

“I look at this photo to remind myself how strong I was. I still want to climb mountains. I told my girlfriends, next year I will be there for sure.”